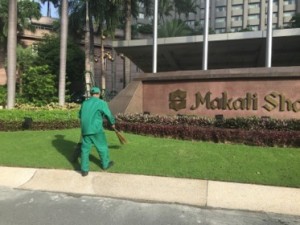 The gal always loves it when team members are improving a product. At a Cathay Pacific lounge the other day, servers were polishing the serving trays – well, they were lacquer, black and rather gorgeous (the trays, that is). It finally stopped raining in Manila and the gal was outside, doing pre-breakfast stretches after working out in the fabulous, just re-opened fitness centre (a.k.a. gym) at Makati Shangri-La, Manila, and here was someone manicuring the lawns in front of the hotel. This is an institution, by the way, one of the two luxury hotels at the junction of Ayala and Makati Avenues: it has been here since 1993 but this 699-room beauty is bang up to the modern minute, and no wonder it has so many repeat guests. 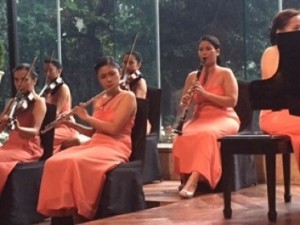 Part of the daily afternoon-tea orchestra

There are so many regular events here. Every afternoon a practically full-scale orchestra performs. At about three, they process in, across the lobby, thirteen elegant women, hair in chignons, bodies clad in tight-top full-length salmon chiffon, feet in high-heeled silver sandals. All but one are playing a string instrument as they walk across: the loner then goes and sits at a black grand piano on the stage at the rear of the lobby, in front of two-floor-high windows looking into the gorgeous gardens. The ladies are joined by a young man in salmon and white bow-tie and tails, who miraculously appears with a double bass. The 14 of them play, delightfully, while groups of ladies sit enjoying afternoon tea in the imposing lobby that is a traditional Shangri-La norm. Come to think of it I cannot recall any Shangri-La that does NOT have an imposing lobby. 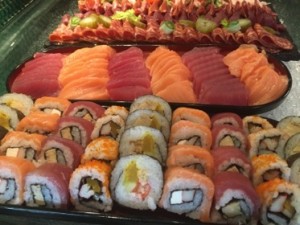 A few days ago there was an evening concert here, by the Manila Symphony Orchestra. The orchestra, I learn, was founded by Dr Alexander Lippay in 1926, and it became a symbol of resistance during World War II. Today it is run by Prof Arturo Molina and it specifically nurtures local young talent. Yes, Filipinos of all interests and ages love this hotel. Take food. Circles all-day restaurant has one of the biggest, and most popular, breakfast buffets. And Inagiku is packed out for lunch and dinner – we had the tempura gozen set lunch, which started with an exquisite tiny-bookcase of delicacies standing on a black lacquer tray (and yes, like Cathay, the tray had been polished immaculately), and next came sashimi, and tempura. 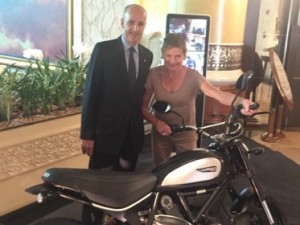 This luxury hotel also hosts visiting chefs like Naples-born, Michelin-starred Rocco Iannone, who works with ForteVillage Resort in Sardinia during the summer. He has been here at Sage Bar as part of Makati Shangri-La, Manila‘s Italian promotion, which also saw a red Ferrari and three Ducatis parked in the lobby. Oh what fun but, unfortunately, they were for display purposes only.