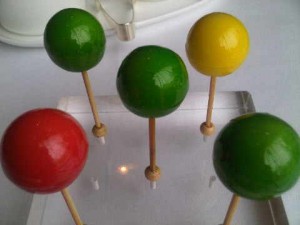 Some things are not what they initially seem.  These brightly-coloured balls are not chandeliers turned through 180 degrees.  No, says the gal, they are chocolate-filled lollipops presented at the end of lunch at Cepe restaurant in Ritz-Carlton Beijing Financial Street (was newly-arrived bubbly chef Omar Ugletei trying to say something?

We, for two of us, only had lollipops stuck into five of the holding base’s eight slots, while two reed-slim local ladies, at a neighbouring table, had a total of eight lollipops).  No worry, the help-yourself antipasti buffet had been divine, as had the home-made basil tagliatelle with porcini.

Choose one of the many mushroom dishes from a menu that has a cover that feels like the most sensuous silk, incredible (it is actually card). 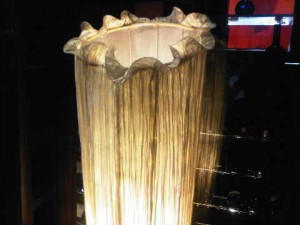 Fortuny-like standing lamp at the entrance to Cepe

The restaurant is definitely themed for mushrooms. A glass-sided humidor holds – mushrooms. There are hundreds of artificial ones on the ceiling of the entrance foyer, off the elegant hotel’s main floor lobby.

There are also six-foot standing sculptures of stiffened Fortuny silk, standing lamps that look like tall mushrooms.  You feel that Chairman Wang, boss of the owning company, Financial Street Holding Co Ltd, and his designers, Hirsch Bedner Associates HBA, have had a lot of fun with this luxury hotel.

The outside of the 25-floor building looks like a rounded-corner green candle. Inside, the lobby has pillars like ceiling-high candles.  The 65-foot indoor pool shows non-stop silent flicks – black and white movies – on its end wall.

Stay in one of the 253 rooms (smallest size 550 sq ft) and you have cream leather or wood veneer walls, and an oval freestanding bathtub. Stay in a Club room, with access to the 18th floor lounge, and you generously get a ten percent discount in the spa. 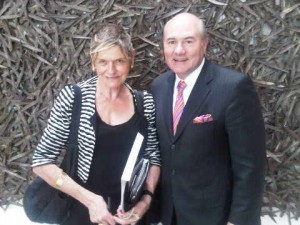 Stay in any room and keep your eyes open when walking through the public areas. One of the many artworks is a 20-foot high collage that looks like 60,000 resin-coloured bamboo leaves stuck on to a base.

That is actually just what it is and apparently, says Mark Lettenbichler, the former engineer who runs this place, it is darned difficult to clean.  It needs blowing.  This is a guy, by the way, who is full of imagination.  When he was working at Ritz-Carlton Millenia in Singapore he realised bathtubs are seldom used so why not turn them to profit centres?

He created the idea of the bath menu. But he is also full of customer service.  He was known in the past to stay up to greet the boss of Goldman Sachs at 0230.  Now times have moved on.

Lettenbichler has a family that demands his attention. And, since the financial debacle, one supposes that fewer people would get up at 0230 to see anyone from GS (other than the sorely-hurt determined to get revenge). 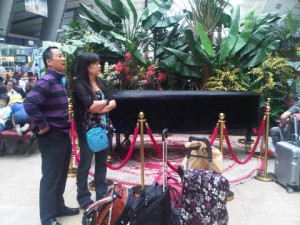 Sadly, the time has come to leave Beijing and its plethora of luxury hotels.  Most people going on to Shanghai fly, which is a scheduled 90-minute hop but ask anyone who knows and you hear horror stories of delays – one of the worst, apparently, is the 2100 departure from Shanghai back to Beijing on a Sunday night, which often leaves two hours late.

Look at the on-time record on feeyo.com and you see that some midday flights, too, have only 52 percent ontime record.  Build in, too, travel time to and from the airports, and check-in time and waiting time and security and other hassles, and the cost… so why, therefore, does anyone fly?  I took the train, from Beijing South station to Shanghai Hongqiao.

It was yet another rail revelation, on a par with the St Petersburg to Moscow train a couple of weeks back.  Beijing South Station is highly modern – it even has a grand piano in the main concourse. 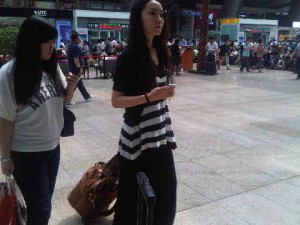 You go through security to get into the station.  Once in, shopping includes a mini Apple Store and a maxi fashion accessories place. The people waiting around are old and new.  No-one bothers me as I spend my extra half hour (the traffic was, for once, not gridlocked) sorting papers.

Hand over your ticket to be stamped and you get a half-litre bottle of mineral water, free. Half an hour or so before departure, show your ticket and passport to one of the chic young agents, all in radio contact, go down to the tracks – light and airy, as far removed from New York’s Penn Station as one can imagine – and straight on to the gleaming, Eurostar-like train.  I seem to be First Class, well worth it as I get burgundy velvet seating with lots of space and, joy oh joy, an electric socket. 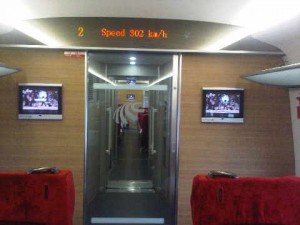 We speed through an endless eternity of neat small-field farms, planted woods and little villages. We get up to 303 kilometres per hour but there is not the slightest shake.  After scheduled stops at Jinan West and Nanjing, we arrive exactly on schedule, four hours and 55 minutes after leaving Beijing.