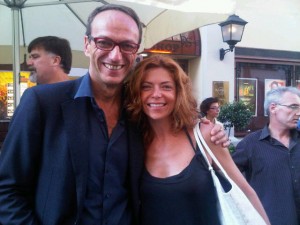 On the last-but-one day of Munich’s annual Oktoberfest, whom did I see but, all the way from Paris, Philippe Leboeuf and Pepita Diamand (she has this great new site, parisstylefile.com, everything you need to know about the recipe for French Chic).  Amazing that we met up, but then Philippe is so tall he stands above even the locals in their lederhosen and goats’ hair tirolerhüte.

And the locals, Bavarians of course, are here in their thousands today.  In all over five million will have visited this, the 178th Oktoberfest.  It all started 17 September, when precisely at noon Christian Udewill, the Lord Mayor of Munich, tapped the first keg of Oktoberfest Beer (a registered trademark).  It has 5.8% to 6.3% alcohol and high sugar content, and during the 16 days of Oktoberfest about seven million litres are served, at €9.20 a litre. 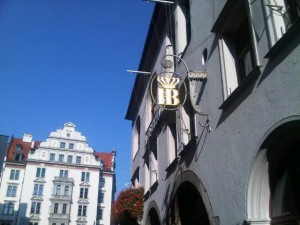 The famous Hofbrauhaus is not the only centre. You see it everywhere around town, impromptu cafés springing up in courtyards, under trees, sit wherever you can, sharing a table with hitherto strangers, and barmaids in dirndls march up holding several glass tankards, each with a litre of beer, in each hand.

Beer is served from 1000 to 2230 (at weekends, it starts at 0900). Drink too much, and you become a Bierleichen, beer corpse.  Eat a little something, say Brezn, pretzel; or Kasspatzn, cheese noodles; or Reiberdatschi, potato pancakes.

They have been doing this on and off since 1810, and now the tourists come flocking.  Japanese are recognisable by their cameras, American women by their dirndls-and-sneakers, which somehow just do not always look quite right (although everyone admired Beverly Hills resident Kim Kardashian when she visited, in full gear, in 2010). 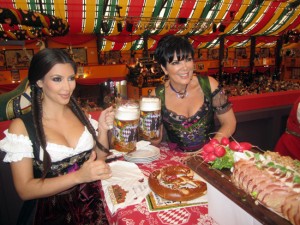 But this girl already has the 2012 even in her diary, 22 September to 7th October, 2012, www.oktoberfest.de/en.  Meanwhile I feel a little like George MacDonald Fraser’s Flashman – in reverse.  In the series of Flashman books, the (anti)hero always seems to be everywhere, at the key moment, but in his case, be it the Charge of the Light Brigade or with John Brown at Harper’s Ferry, it is bad news.  For girlahead, however, it is the opposite.  Be at the right place, the right time, for the good things of life, like here in Munich on the last day of Oktoberfest 2011. 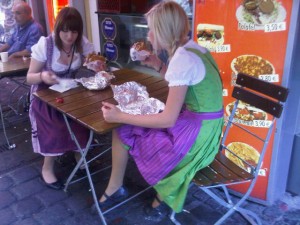 .. and exhausted barmaids fill up on Macs

Today is a national holiday, celebrating Reunification, and there will be yet more tens of thousands making the most of the last day of Oktoberfest 2011, one of the world’s true luxury travel experiences. Tomorrow it will be back to normal, namely serious hard work, Bavarian-style.