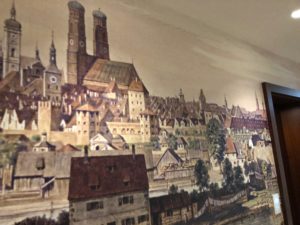 Hotel Vier Jahreszeiten Kempinski, 100% owned by that august luxury hotel company, is a significant player in Munich’s past.  It was built by King Maximilian II in 1858 as his personal guest-house, on the main central thoroughfare named in his honour.  Named (the original) ‘four seasons’, a glorious seasons’ stained glass ceiling dominates the lobby – see it, above. Over the years it has attracted the rich and the famous: the Clintons, Bill, Hillary and Chelsea, with a brigade of security of course, are reputed to have been there for the last Oktoberfest.  Every annual beer-drinking session, by the way, average rates at the 305-room luxury hotel double, but guests are invited to join the local elite at the hotel’s own civilized cocktail, the first Sunday of Oktoberfest.  The gal, fortunately, was not there at gala time, but a sense of place permeates year-round. Corridors and some walls have ceiling-high blow-ups of local sights. 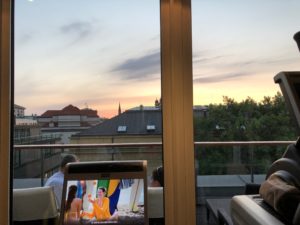 View from the gym, sunset

The wellness area, open from 6.30 a.m., is popular year-round with those who want to work out, use the indoor pool or a sauna – being Germany, one sauna is clothes-free. Summer-long, the wellness centre’s flower-decked terrace attracts sunset-watchers, and smokers. There is, however, no need to be outside here: down on the ground floor there is a well-stocked cigar store, and an adjacent smoking lounge, with Airkel.  This is an innovative system from Switzerland. Thousands of pinpricks in the wood floor and ceiling and powerful air suction and filtering mean air is drawn down through the floor and purified. Now pristine, it re-enters the lounge through the ceiling.  Honestly, even with my acute sensitivity to smoke I could not detect anything.  This system should be compulsory in cigar lounges everywhere. 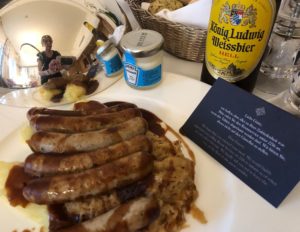 I arrived in Munich fairly late.  I was hungry. This was a great opportunity to dine local, so to speak. My order of six Nuremberg wurst sausages, sauerkraut and mash was up in the stated 25 minutes. SIX sausages? In England three would be my norm but of all Germany’s 1,500 or so sausage varieties, the Nuremberg must be among the most dainty: typically made of 30% beef and 70% pork belly, each sausage must be no longer than 9 cm, and weigh no more than 25 grams.  Now for the sauerkraut, which normally I avoid but here, in the cause of duty, I tried, and it was SO delicious I ate the whole lot. Later, while researching, I learned this fermented raw cabbage is a high source of vitamins C and K and during the American Civil War eating sauerkraut was thought to have reduced the death rate while, today, there are theories that it could be anti-cancer. 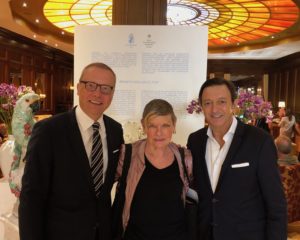 Now, in summer, this luxury hotel is a base for medical tourists, and others attracted by the city’s magnificent historical centre (Marienplatz and the Neues Rathaus are under ten minutes’ walk in one direction, as is the English Garden, in the other direction). And do not forget retail – Maximilianstrasse is flush with brands; if you simply look across from the main door you have, from your left, YSL, Hermès, Cartier, Chanel and Dior. It is also a hotel for running into people unexpectedly. On my arrival I coincided with Michael Luible, whose career highlights include overseeing the opening of One&Only Reethi Rah in The Maldives (he is now living in Bali).  And on my way out, Holger Schroth, MD of ‘the VJ’, rushed me over to another guest, Xavier Destribats, Kempinski’s Man In Havana, in town for family reasons.  For those who are, or aspire to be, someone, this is your place. I would, however, suggest one addition to the attractions above. Try to reserve two hours to visit surfwelle, a sensational non-stop surfing display on artificially-induced waves on the Eisbach at Prinzregentenstrasse, 18 minutes’ drive south of the hotel (and, a useful tip, Munich is one of only four enlightened German cities which allows Uber, the others being Berlin, Düsseldorf and Frankfurt). NOW SEE SUITE 231