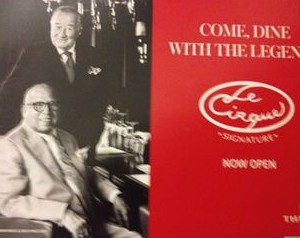 A pair of legends, named Nair and Maccioni

After that pair of legends, Leela’s Hon Chairman and his wife, Madame Leela, it was time to check out on another duo, this time the Hon Chairman, founder and now Chairman Emeritus of The Leela company, with his good friend Sirio Maccioni, founder of the Maccioni food empire that has Le Cirques, Sirio Ristorantes and other restaurants in most of the world’s food centres.  Le Cirque Signature in the luxury hotel Leela Palace Mumbai opened just under a month ago, and gal was thrilled to be spending her last supper – on this trip, at least – here. 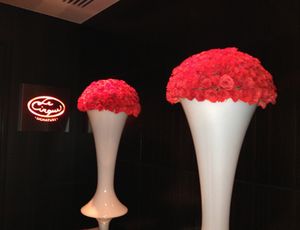 Floral guard of honour at arrival

The restaurant is on the top, eighth, floor of the hotel, in the wing that also houses meeting rooms. Jeffrey Wilkes, who did the exciting new Citrus restaurant in Leela Palace Bangalore, has tweaked this particular space, and very attractive it is.  You enter via giant flower arrangements, and an attractive hostess in a black dress with sash that exactly matches the floor hands you over to a head waiter who guides you past glass-walled wine racks.  The room is dark, alluring (though there are some lighted areas if you want to read). The floor is dark wood, tables are simply covered with white linens, and there is a white-sleeve oil-wick light. White Villeroy & Boch china has tiny Le Cirque motifs. 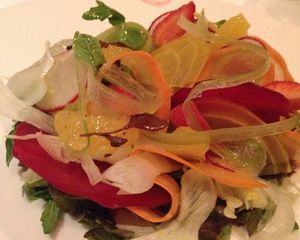 I went for Le Cirque classics, starting with a Le Cirque salad, of ruccola, lollo rosso, and the thinnest, paper-thin, slivers of red and yellow beets, plus bits of fig, strawberries, fennel and toasted sunflower seeds.  This colourful plate went well with the pink of the Moët Rosé in Schott Zwiesel glasses with stems so tall I barely dared touch them – this is a very elegant theatre, by the way, with leather and fabric chairs that are much more manouevrable than the Indian norm, which is no-one but a Sumo can lift or move any chair (but is this what servers are for?).  I liked having a choice of olive oils, and the breads were still warm. They are fresh-baked three times each evening. 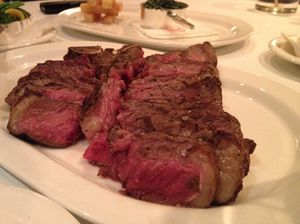 ..then a Florentine steak

Mario Maccioni, eldest son of the Maccioni clan, has been here for a month training the servers, who glided around as if on ice skates on that shiny floor. The sommelier suggested a Barbaresco 2007 Ricossa, which he decanted (Riedel, of course).  I shared another Le Cirque favourite, a Florentine-style T-bone, which came already off the bone, sliced in chunks, with little building-blocks of pont-neuf potatoes, like air-filled fries, and creamed spinach. The knives were Laguiole, of course.  I expected this to be good – the chef is Florentine – and it was. 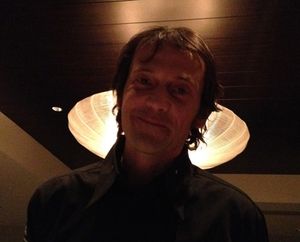 And then he, chef Matteo Naglione, made an appearance, coming in as if he were beatified or from another world.  Chefs in black cooking gear should not, of course, stand in front of a dark background, and they should not stand in such a position that the overhead light behind looks more like the neck pillow that many travellers use when on longhaul flights.  But he is such a charming guy I wanted to include him anyway. Thank you, Matteo, for making the experience so agreeable (but then I did enjoy Le Cirques, too, in Leela Palace Delhi, and the more-casual Sirio Ristorante in The Pierre, in New York). 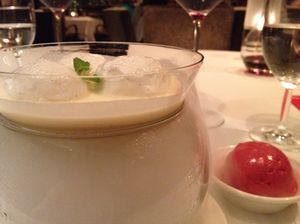 And finally, the signature floating island

Finally, sticking to our determination to eat ‘signatures’, we rounded off with floating island Le Cirque, which arrives in a glass bowl steaming with dry ice.  The poached meringue is swimming in a vanilla bean crème Anglaise, and comes with a raspberry sorbet. And that, sadly, was that.  Last supper over, I rushed along to lovely suite 805, just along the corridor of this luxury hotel, for a bathsalt-laced lazy bath, an hour’s sleep and thus to the airport.