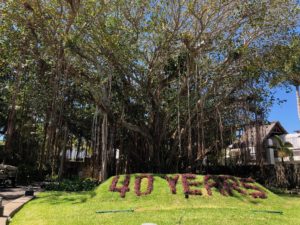 Shangri-La’s Le Touessrok Resort & Spa, Mauritius has been a respected name, at least among global travellers, since it was opened in 1978 by Jacqueline Delais, a chef who became renowned for serving lobster thermidor, or coconut flambé, to the island’s sugar barons.  That history is treasured.  The gal was told at least 20 staff have been here since opening, and 50% of the total 650-strong team are 20-years-plus veterans.  You know how old, sorry, YOUNG, the hotel is as you are driven up to the immense banyan tree in front of the main entrance, where a colourful Creole dancer twirls in greeting.  I was instantly aware of colour everywhere here: white sand, blue through to turquoise sea, blue sky, daffodil yellow frocks of guest relations ladies, pine and taupe outfits for housekeeping and room service. 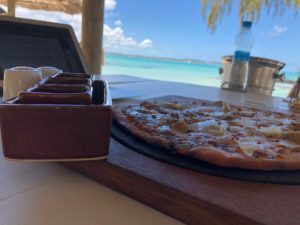 This is a 168-room hotel that has a myriad of followers. Like a flock of migrating birds, indeed, 170 or so regular hotel guests, called The Repeaters, descend on the hotel every year for the last two weeks of November.  Nobody organises this, they just come.  Hotel GM Gerhard Hecker and his managers do, however, arrange the programme, minutely. This year, from a Sunday brunch on November 4th through to a final fund-raising dinner on Friday November 30th there is at least one event every day. The Repeaters can buy into the opportunity to dine in a local home, or take part in a regatta. The hotel hosted the main 40th birthday gala on November 25th (please wear red, the guests were told). 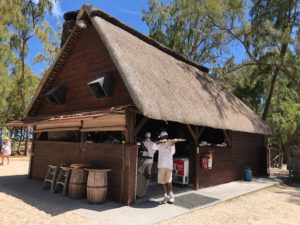 In between, The Repeaters do what they want. Many take a boat shuttle to nearby Ile aux Cerfs, to play its 18-hole Bernhard Langer golf course. I took the resort’s complimentary 15-minute shuttle over to the other island that the hotel manages, Ilot Mangénie.  This is deliberately left somewhat wild: it has no accommodation but at lunchtime a simple-food snack bar opens up.  You must try the truffle pizza, Gerhard Hecker had said, and sure enough it was simply delicious. Eat it finger-style, feet in the sand, looking at the blue waters of the Indian Ocean six yards away. On the way back the signature outline of Le Touessrok – see the photo above – shows. 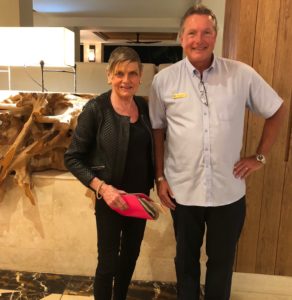 Gerhard Hecker has a couple of decades of running top luxury hotels in many countries but this is his first resort, and he admits that he did not realise the extra demands of a resort.  Average stay is longer, and guests, especially regulars, expect more variety in dining and things to do, and they hope to spend more time with the GM.  I was all the more surprised, therefore, to see ‘the boss’ waiting to say goodbye when I left at 8 p.m.  Yes, yet another overnight flight awaited, but at least I was fortified by a copious Mediterranean buffet, where I composed a colourful platter of beetroot and green salads on a turquoise RAK plate – and there was a final burst of colour from a yellow-frock who took the photo here. AND SO, SEE THE SEA-TRAFFIC PASSING BY, AND THEN SUITE 235