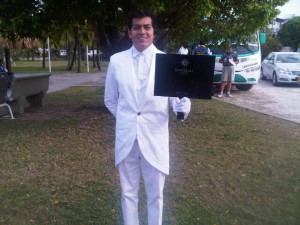 The meeter-greeter from Sofitel Santa Clara

Silver Cloud nosed quietly up to Cartagena, and the gal began a hectic half-day of travel.  Why we were only to have so few hours in this fascinating Colombian port baffled everyone on board, but still.

Messages had come saying that that Edwin the Butler would be waiting for us shoreside, and sure enough there he was.  All meeters and greeters should be like him, upright as a vertical rod, suit white as snow, genuine smile like a full moon, and holding an easy-to-read notice board. 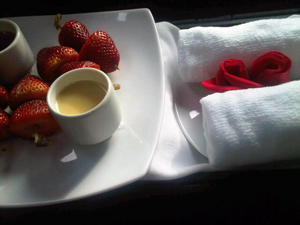 Strawberries in the car

He put us in the Sofitel Santa Clara’s car.  Between the two back seats rested a plate of strawberry skewers and linen-wrapped glasses to hold chilled Evian water – well, we were headed for a French-managed luxury hotel. 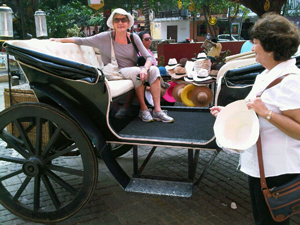 Horse-drawn carriages are visitors’ main means of transport in Cartagena (called de Indias to distinguish it from the original Spanish one).  These carriages hold four passengers, and they patiently ply the streets of the old city.  The horses seem to know their way blindfold, so they barely need their drivers. 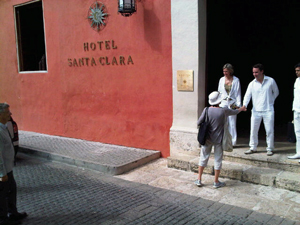 Our transport during these hours in Cartagena also included walking, up five flights of stairs at the hotel – much more fun than taking the elevators. And when we were ready to go back to the ship, blow-me-down-with-a-feather duster, the car’s snacks had changed to a selection of one-bite desserts.

The feather-duster colloquialism reminds me of the brilliant autobiographical lecture onboard Silver Cloud last night, by the onboard cruise director Judie Abbott.

Among her endless claims to fame were playing pantomime with Adam Faith and being the first-ever solo entertainer on the Queen Elizabeth II when it launched in 1967. She was given no expenses to get her show going, and spent all her savings on professional music compiled by Petula Clark’s arranger. 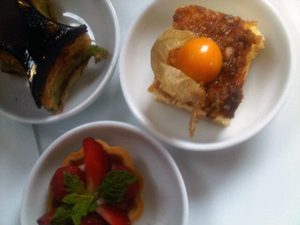 Going back to Silver Cloud, the car's snacks have miraculously changed

There was no money for the costumes she obviously needed so she devised methods of converting lurex one-piece swimsuits, by taking one shoulder strap below-arm, so to speak, and adding a skirt.

She sewed on Swarovski gems a-plenty and did lots of feather addenda.  How to attach those feathers?  She bought a feather duster, took it to pieces and realised she could hold feathers in place with sellotape (Scotch tape), sew’em in place and then remove the tape.