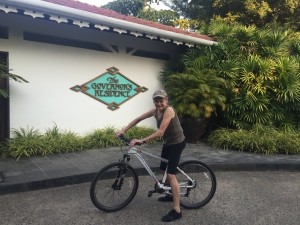 The city‘s biggest tourist, and religious, attraction, Shwedagon Pagoda towers over Yangon. Apparently, says the gal, four of the Buddha‘s hairs are stored here, although since he shaved his head when he turned to asceticism they are presumably very short. The image above was taken while cycling in the adjacent People’s Park early one morning. The best way to get around the centre of the city, by the way, is definitely by bicycle (borrow one from your luxury hotel) as any motorized transport can get stuck, in a solid jam. There are simply too many cars for the size of the roads. Another way to see the city is to take the three-hour circumferential Circle Train. 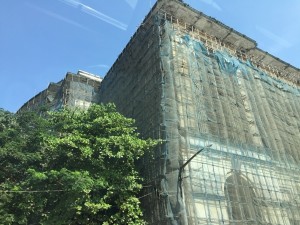 Several wrapped building sites showing the determination of authorities, or whoever, to preserve and convert historic edifices. Here is the projected-Kempinski, on Strand Road overlooking the Yangon River. It was built in 1925 as the police commissioner’s office, a decidedly over-stated base for that role, one would have thought. It is now, apparently, being converted, at the total cost of some $60 million, by a local firm, Jewelry Luck Group, and two Bangkok-based entities, Kanok Furniture and Decoration, and Siam Commercial Bank. All being well it will result in 226 bedrooms. Its main competitor will undoubtedly be The Strand, also on Strand Road, particularly if Gaw Capital, which oversees the venerable Strand, decides to spend money on bringing it up to date (titivation is not enough) 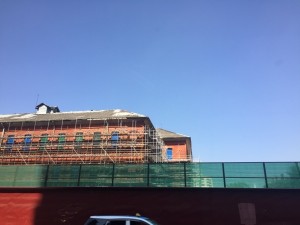 The 1877-vintage railway headquarters building is also being converted, by Myanmar’s best-known business tycoon, Serge Pun, who learned resilience in a Yunnan rehabilitation camp before, at the age of 12, building a dam with his bare hands. He now has over 30 companies, including Singapore‘s Yoma Srategic, and he finances the air-shuttle between Yangon and the country’s new capital, Naypyidaw. Peninsula Yangon is progressing ‘slowly’, one could say. Eventually, they do say, it will have 85 rooms. As is obvious, it is extremely convenient for the main Central Railway Station. It is just the other side of Sule Pagoda Road from the well-established Sule Shangri-La, Yangon. 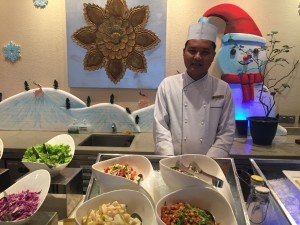 This is, like PARKroyal Yangon, a luxury hotel that truly knows the market, and is part of the local community to such an extent that Shangri-La GM Caroline Cheah says she will have to expand the LifeFitness gym to accommodate the demand for outside members. Here, the many business guests, including Japanese here for banking, make good use of the tenth floor Horizon Club. They also flock to the Café Sule, which looks out both to Sule Pagoda Road and to Anawrahta Road. At New Year, 200 people had pre-booked for the ballroom gala. Every Sunday, says Caroline Cheah, Sunday brunch, at $36 a considerable cost here, attracts fortunate millennials spending daddy’s money. One had parked his Ferrari outside the front door.