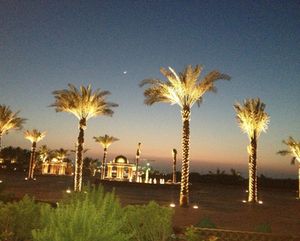 To continue on the luxury theme, seeing something so natural and so unexpected as a perfect new moon is another component.  The gal was about to dine outside, on the terrace of Sayad fish restaurant at Emirates Palace Kempinski Abu Dhabi.  There, looking down at us, was this sliver of a moon. The hotel’s lovely chef Sandro Gambo, who made his name at another luxury hotel, Park Hyatt Chicago, came by to say hello and we toasted the moon, together. 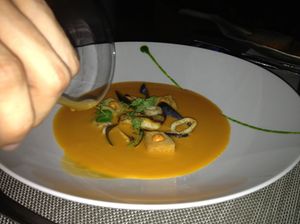 Sandro Gambo knows how to prepare food to bring out the best of its flavour.  It does not have to be complicated, but a bit of show helps.  Here one of the servers is finishing a bouillabaisse, the Provençal fish stew that originated in Marseille.  At Sayad, a bowl is brought with tiny fish creations in it, and the soup part is carefully poured over.  I discover later that word bouillabaisse comes from the Provençal dialects for bolhabaissa, bolhir, to boil, and abaissar, to simmer. 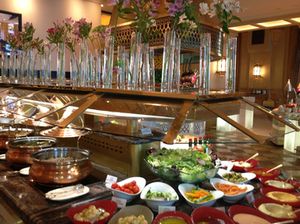 A small corner of the enormous breakfast display

At breakfast, here, as in other top hotels in Abu Dhabi, locals are eating almost as soon as the place, Le Vendôme, opens. Several tables are ladies-only, completely veiled in black. Twice as many tables are men only, guys in white dish-dashes.  There are Arabic, and Chinese and Japanese sections, and a salmon carving table, and omelette specialists and waffle specialists.  The coffee, by the way, is sensational (if you hear anyone say hotels cannot produce good coffee, suggest they come here, for coffee from a local company, Maromas). 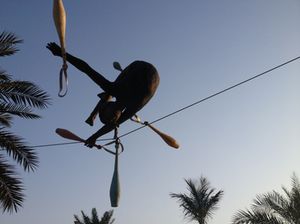 A Jotka sculpture hangs between trees…

Luxury is also feasts for the eye, of beautiful old sculptures like some of the Xi’an warrior-type in vitrines in the shiny marble walkways.  Outside, there is an exhibition of sculptures suspended between trees.  All the pieces are by a Pole, Jerzy Kedzior, known as Jotka.  He specializes in pieces that defy gravity – in 2008 his Under the Dubai Sky – Creating Balance collection was shown to great acclaim in Dubai, sponsored by Barclays Wealth. 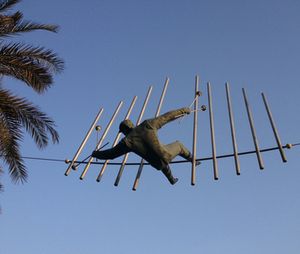 Each piece here in Abu Dhabi is more amusing than the last – head to see the collection now, as it is a temporary show, and will at some point be taken down (so far it has been extended twice). Jotka was born in Czestochowa, southern Poland, eldest of the seven offspring of an electrician and a professional knitter.  The little boy would draw designs which his mother would incorporate into her knitting. He graduated to decorating churches and other buildings. Today, his balance sculptures are inspired by Gothic architecture throughout Europe, and by New York’s skyscrapers. Many are bought by German hospitals as therapy for patients. 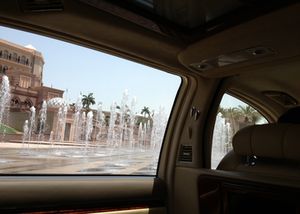 Palace fountains seen from a Maybach

Seeing his pieces in the gardens of this, one of the world’s ultimate luxury hotels, I felt awe-struck by the laws of physics that Jotka says help him to gauge a piece’s stability.   I get into the back of a cream leather-lined Maybach and leave, having learned yet more lessons on what today’s luxury could be.  Having clear clocks in the back of the car, clocks that tell me the time here and in other world cities, is another element.