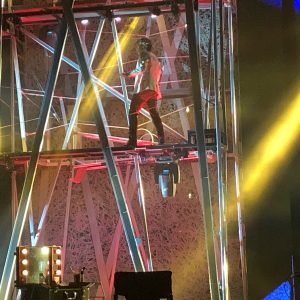 After the opening Forum for Virtuoso Travel Week, VTW, there was a general cocktail buffet hosted by Bellagio and Virtuoso. Next, as part of the media team, I was lucky enough to be invited for a suckling pig (and more) buffet by Langham, atop the adjacent Aria hotel.  Virtuoso’s Misty Ewing and her Alice Marshall colleagues are the best when it comes to press arrangements.  On the Monday, for instance, they took us along The Strip to Luxor, whose President Cliff Atkinson, once GM of what is now the luxury Waldorf Astoria Las Vegas hotel, hosted us to a pre-lunch preview of its highly-atypical R.U.N. Cirque du Soleil show, opening October – see the video, below. It is a modern take on Romeo and Juliet, rival gangs in 21st-century Vegas. 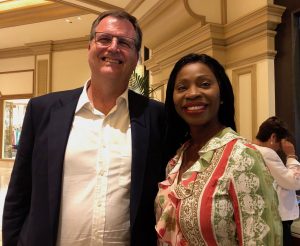 Monday through Thursday saw days of speed-dating, the thousands of travel advisors sitting tight while hotels and other partners moved like clockwork, every four minutes in the morning and 10 minutes in the afternoon. As always, people lost their voices… as always, lunches were networking sessions, and evenings were a multitude of cocktails and dinners.  Olivia Brown, the ever-present VP Hotel Operations of Bellagio, cleverly held court at a pop-up desk outside Palio, the day-long café that is meeting point, inside or out on the terrace, for so many. Lots of her friends called by to say hello – she also hosted in Sardelle’s, the hotel’s new all day restaurant, pastel icecream colours with the world’s biggest French toast portions. There is always something new at Bellagio: also a surprise, this year, was the moving horses trio in the central winter garden. Yes, the horse seen above is not real but its head and its ‘jockey’ both move (see a video below, and the flowers are real, and attract thousands of visitors every day). 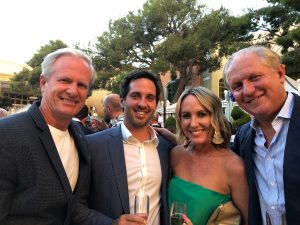 Before I saw Switzerland win the top tourism award at the Destination Showcase dinner, I went to cocktails hosted by Corinthia London, The Halekulani, The Jefferson, and the K Club.  Another night I met up with so many friends at ILTM’s Caribbean cocktail, and called in on parties hosted by Jumeirah, One&Only, and Trump. My last event was the hotels’ Best of the Best dinner, sponsored, with the help of masses of Laurent-Perrier Rosé by Hilton’s luxury division – head of Hilton luxury Martin Rinck was supported by 52 black-tie managers from 30 hotels (the white dinner jacket at the Hilton tables belonged to Smart Flyer’s Michael Holtz). 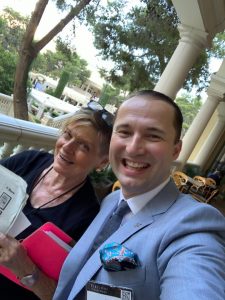 Voted for by Virtuoso advisors, the winners were announced by Albert Herrera.  Mandarin Oriental London Hyde Park GM Amanda Hyndman was hotelier of the year; Carlos Quereda, formerly at Marbella Club, ambassador; Paris Four Seasons George V Paris, hotel; Montage Los Cabos, newcomer; Grand Velas Playa del Carmen, family-friendliness;  Miraval (Hyatt), Tucson AZ, wellness; Rosewood Hong Kong, design; La Réserve Paris Le Gabriel, dining; Four Seasons at the Surf Club’s Le Sirenuse Champagne Bar, bar; Australia’s One&Only Wolgan Valley, sustainable tourism. The entertainment that evening, orchestrated by Herrera, was a routine that outdid Hotel Budapest – see below. And so, all week long, as well as all the business speed-datings, formal dinners and cocktails, there were informal meetings and hundreds of waves and acknowledgements as I, and everyone, rushed back and forth, trying not to forget the time while remembering myriad new ideas and opportunities.  It is exhausting but no-one in luxury hospitality should miss this event. NOW SEE VIDEOS OF R.U.N. – AND THE HOTELS’ BEST OF THE BEST ‘TIMELESS’ ROUTINE