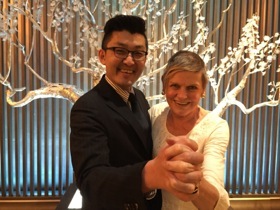 Akihiko (Aki) Gondo was entertaining, in more senses than one. As Assistant Director of Sales of the St Regis Osaka luxury hotel, he had been deputed to look after me for the evening (GM Kenji Fukanaga was away). The gal learned a lot about how a bachelor lives, how he found his house (he met its owner in a bar) and the cameraderie that exists with the other four tenants in his five-house terrace location. It sounds like the perfect neighbourhood watch situation, but then, as people were saying at ILTM Japan the other day, Japan is the only place in the world where you feel if you left your quarter-of-a-million Breitling on a table in a public place it would still be there half an hour later. 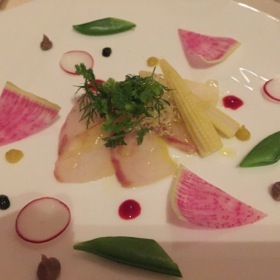 That having been said, however, Philippe Roux-Dessarps, GM of Park Hyatt Tokyo, says nearly everyone coming into his ground floor entrance and passing the giant Antony Donaldson open-globe sculpture bends down to try, in vain, to pick up the watch that lies at its base… Back to dinner, here in Osaka. The choices are a French pavement-set bistro, or a 12th floor Italian, La Veduta, its tables set in an L area wrapping around the working kitchen. The menu is on an iPad, easy for staff to update but cumbersome, and conversation-stopping, for diners. You must have longtoothed grouper, everyone said – it is a rare delicacy, Epinephelus bruneus, well over four feet in length. I had about four inches of it, carpaccio, with slivers of radish, and it was mild and quite sweet (it also looked exactly like the iPad photo). 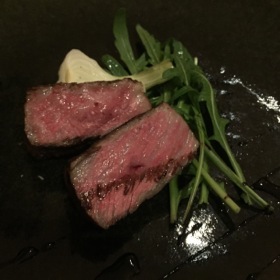 Try one of the Wagyus, everyone said. I went for the Sanda Wagyu – gosh, I never knew that the shogun banned eating any four-legged animal from 1653 to 1838 (perhaps that has given Maharashtra State confidence in its total banning of beef eating, or even possession of, beef in the Mumbai area). Fortunately the iPad illustration of my dish which had had polenta, gave way to a baby artichoke with the rocket. The restaurant had been nearly full earlier but by nine we were the penultimate table. Yes, Japanese eat earlier, confirmed Aki-san, and he then went off to his home. I went up to 2782, with its dining-for-ten, and its four-post bed. 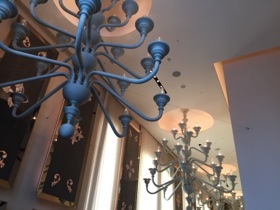 At breakfast, back in La Veduta, I was able to do justice to the chandeliers. These are three-level wood-look structures – actually twine-covered metal, designed in Paris by a Brazilian – that require retaining wires, presumably in case of earthquakes. Safety throughout Japan is predominant (my room has an emergency door leading to an outside staircase). Food safety is another concern: no-one will serve rare salmon for some reason, but you can eat as much raw fish, and even chicken carpaccio, as you like.