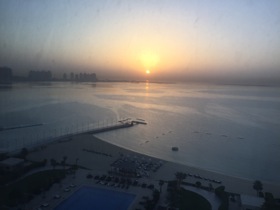 Sunrise from my window

The sun comes up on another beautiful day in Doha, the Qatari capital that wants to be Dubai, and since it has so much more money it could well be so, in years to come. Surprisingly, says the gal, Qatar is an hour behind UAE, timewise, so the sun does come up amazingly early, well before five, and the beach cleaners at Doha’s luxury hotels are already hard at work – some rake the sand with no fewer than five normal garden rakes held, on a fixed rack, side by side so the sweep is really wide. Everything of course has to be pristine, thanks to the efforts of armies of foreign workers. 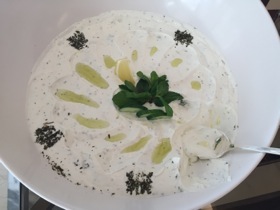 Qataris are too preoccupied with strategising, and making pots of money – and spending it. The Emir’s sister, Sheikha Al-Mayassa bint Hamad bin Khalifa Al-Thani, 32, has double majors in Literature and Political Science from Duke. She has two children, speaks three languages and, as Chairman of Qatar Museums, forks out vast sums for celebrated paintings, including $250 million for Cézanne‘s The Card Players. It does seem, by the way, that the Qatari women in general are among the most stylish in the Gulf. They may wrap themselves up in black when in public but it is black Chanel or Gucci, and they move like swans. 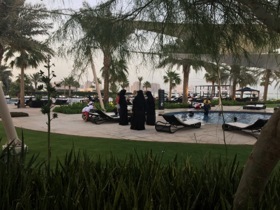 I dine at St Regis Doha with Dagmar Lyons, a real foodie who ran her own bakery back in Dublin for a time. We might have gone for Arabic, say starting with mezze of lebaneh and babaghannouj and the like, but we choose The Astor Grill, a really casual and fun place that is mostly scarlet, with an open kitchen and a four-foot gold apple standing in one corner. I could have had an Astor burger, or the roast of the day (braised beef cheek with mash) but start, instead, with a round of hand-cut steak tartare, with a glass of Erath Estate Selection Pinot Noir Willamette Valley 2010 from Oregon. The internationalism of life here is illustrated by breakfast jams and butters, all from France, going with Luxembourg china (Villeroy & Boch) and Italian Sambonet cutlery. 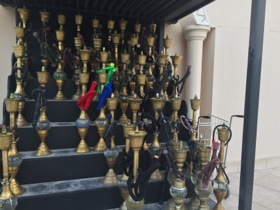 Shisha hubbly-bubblies at the ready

Lots of Qatari beauties are breakfasting early, with children and/or their menfolk, for whom they sometimes bring the food from the buffet. And then they are out to the pool, to parade around in their designer blacks while the children frolic in the same scanty swimwear that kids wear anywhere in the world. Fortunately help is at hand for the mothers: this luxury hotel thoughtfully has ten substantial cabanas, surrounded by high hedges so if the ladies want to use the private outdoor plunge pools no-one will see them. There is also a rack of shisha hubbly-bubblies and yes, Qatari women smoke them just as much as the men.