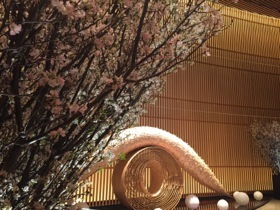 Should hotel lobbies be aggressive, assertive or utterly soothing? The Peninsula Tokyo lobby offers a welcoming lounging area that is also calming and perfectly in proportion. At its rear is Lying Dragon Gate, a bamboo sculpture by a local female sculptor, Keisen Hama. The gal was in town during the luxury hotel’s annual cherry blossom festival, ahead of the official March 26th, 2015 start of the public flowering of cherry blossom trees. The hotel pays a fortune for specially harvested blooms from Gunma Prefecture on Honshu Island, cut just as the buds begin to appear and trucked the 110-mile journey to Tokyo. 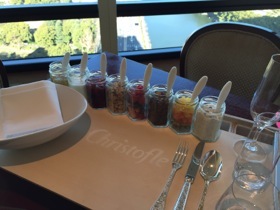 This kind of detail is typical of this hotel. Take a VIP welcome, which could well be a Christofle presentation in a labelled box. Open it at the rear and find bottles of fresh juice, and Moët halves, rosé and brut, and on top, with Christofle gold-highlighted solid silver cutlery and Villeroy & Boch P-inscribed china, are eight glasses, with spoons, of fresh cut fruits and other delicacies. Talking of food, you can eat so well throughout the hotel. There is Peter, the modern Yabu Pushelberg-designed rooftop grill. Try Chinese in Hel Fung, designer Henry Leung, or the famous afternoon tea – for which people stand in line an hour ahead – or comfort-food dinners in the lobby. 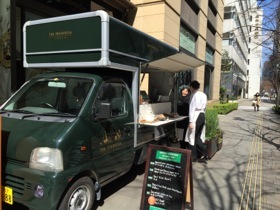 After an outstanding steak-and-fries, followed by mango and cherry blossom icecream, in the lobby, surrounded by the cherry blossom, I headed up to my favourite 2001 suite, overlooking the Imperial Gardens, to find a selection of eight different tea leaves, including cherry blossom. Of course I chose that one rather than, say, green tea with Thai flavours. You have guessed, cherry blossom tea is absolutely delicious! The following morning I was out cycling around the Imperial Gardens, on a hotel bicycle, when I passed the hotel’s food truck, offering yet more food alternatives to those not lucky enough to get a seat in the lobby. 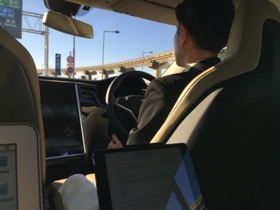 This is a luxury hotel with so many forms of transport, from bicycles and food trucks to Mini Coopers and Rolls-Royces, in Peninsula Green of course. They also suggest airport transport by Tesla, such a silent vehicle that the driver must be constantly vigilant in case cyclists do not hear it coming. In Japan, fortunately, many cyclists, myself included, use the pavement-sidewalk, and pedestrians are so law-abiding that they wait for walking-only traffic lights even when there is not a car in sight, in any direction.