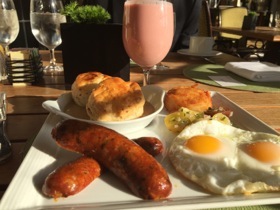 When in Rome, do as the Romans do, which could mean breakfasting merely on coffee and a slice of fruit flan. In Dallas, however, obviously a Texan breakfast should be order of the day. On her last day in the Lone Star State, the gal did her duty, here at Rosewood Mansion on Turtle Creek. This is what the luxury hotel produces, with a peach and raspberry smoothie to wash it down – two Vital Farm eggs, any way, a bacon buttermilk biscuit with ‘red-eye’ coffee-infused gravy, jalapeño sausage and hash browns. This is presumably what Larry Hagman and the other Southfork folks had, presumably, before riding out on the ranch. 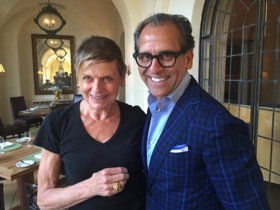 I ate superbly throughout my stay. Dinner had been a temptation – would I go for one of chef Bruno Davaillon’s specials, a gourmand menu with caviar, foie gras and those only as starter courses, or a black truffle menu with scallops, 63-degree eggs and much more, culminating in toffee bread pudding (surely that one was not truffled?). In fact I opted differently, starting with the all-time best-selling shrimp cocktail, on a horseradish panna cotta. Yes, they can do anything. When Rosewood’s globally peripatetic President, Radha Arora, alighted briefly after a fact-finding trip to Los Angeles, he even had fish and chips, in the form of tempura goujons and lightest fries. 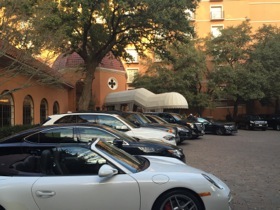 Radha Arora is consistently catwalk king when it comes to the higher echelons of hoteliers. His hotels, by contrast, are discreet. Look at this entrance, which seems more private house than hotel, an echo of the fact that the 143-room hotel has indeed evolved from the mansion that Sheppard King built on Turtle Creek back in 1923. The Kings loved history and antiques, and this is why the interior of the mansion part of the whole still has centuries-old columns and moulded ceilings, brought in from Europe, and a spiral staircase that many of the 40-or-so brides who marry here every year use for photo shoots. (On discretion, by the way, note that no-one would dare to park a yellow Lamborghini, like those you find, sometimes clamped, outside Harrods, here in this know-how-to-behave theatre.) 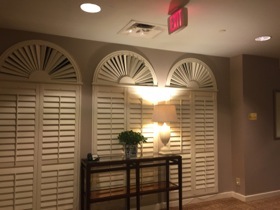 Even the new block of this luxury hotel evokes the past. Elevator lobbies on all nine floors have louvred shutters, in antebellum style. The whole effect is remarkably soothing and pleasant. I looked out of my French windows, suite 711. across at the growth of apartment blocks and manageable detached houses around, and those still coming up (cannot believe that Texans still build houses by first putting up wooden beams, which they nail together, but they do). This part of town is growth-growth in residential living, and there are over a thousand invitation-only members of The Mansion’s club. These people dine here, celebrate here, marry here. Forget all those newcomers, this is the centre of top Dallas life.