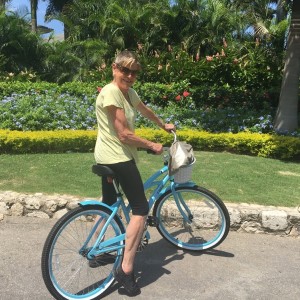 The gal was having a ball at Jamaica’s most comprehensive, and beautiful, luxury resort, Half Moon Bay. There is no competitor that has all these facilities, two miles of pristine beach, 400 acres, golf, an equestrian centre, 13 tennis courts, snooker either inside or on the beach (what MORE could anyone want?). There are buggies for most of the 398 bedrooms but there are also city-bikes. A new supply of bright turquoise aluminium bikes had just arrived from South Carolina and, what bliss, here is the first one. It was just perfect to do a short circuit once the sun came up, suddenly, at six, and then head for the really good LifeFitness gym, when it opened at 6.30 a.m. – this is the rare gym where they quickly know all regulars’ names and so greet you personally. 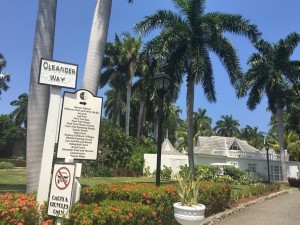 Oleander Walk led to my villa

Some of the walkways, through beautiful gardens, are fortunately car-free. Later in the day my routine included a more extensive cycle ride. I would head east, past some of the courts, and the putting green with the kids’ club behind. The club, by the way, has two programmes, Brer Rabbit for under sevens, and Brer Tiger for the seven to 12-year olds, and both have a range of Rainy Daze alternatives just in case, heaven forbid, the heavens should open (my villa had an umbrella: it also had big LG screens, unlike at least one other resort in the Montego Bay area which is television-free). Still cycling, I would come to Oleander Terrace, a building that has yet another big pool, and one of the restaurants, and one of the outdoor wedding locations. 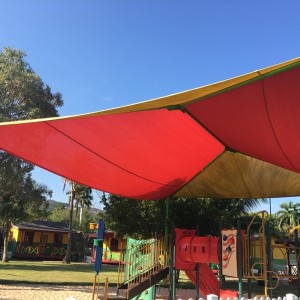 One area of the extensive kids’ club

On and on, past another wedding location, and then Dolphin Lagoon, where you swim with dolphins, and to an outdoor market that hosts two must-visit Jamaican barbeques, on Fridays and Mondays. Tip, turn up early. Enjoy great local and international dishes, listen to steel bands and watch, and take part, in limbo and bamboo-pole dancing, and do not miss the crab race. Crabs with coloured backs are held under a clear plastic cloche in the centre of a cloth on the platform. All around kids, and their parents, watch avidly, putting bets on. The commentator lifts the cloche and his lightning patter would do justice to Kentucky, Epsom or Melbourne: the crab that reaches the edge of the cloth first is the winner. Watch the crab video below. 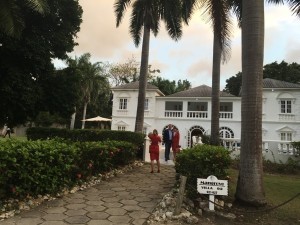 One of two villas Virgin crew use

But if it is still daylight you might yet be cycling on, to get even more exercise while not going outside this luxury hotel’s enormous – 400 acre – campus. Finally you get to the 31 palatial villas, with anything up to seven bedrooms, and a big pool, each: the villas come with private cooks. As it happened I was cycling past one of the two villas where the Virgin cabin crew stay in between flights – lucky them! I continued on my circuitous route, coming back via an inner road, past the wedding gazebo, and the herb garden and the equestrian centre, and finally back to villa 78, that felt like home after just one night – at Christmas and New Year, incidentally, minimum stay is 12 nights, but many family groups simply book up year after year.