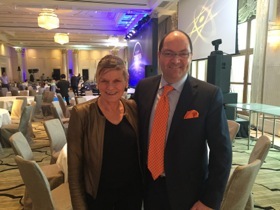 Max Musto in his big-big ballroom

Which genius has put this luxury hotel’s bellmen into scarlet uniforms, by the Toronto-based designer Thomas Chung of Fourmy, and who switched what was to be a steakhouse into finest Italian? The answer, my friend, is blowing in the wind – it is Max Musto, an Italian who started his career stewarding when he was still at school and then went to learn English in Aberdeen (for those of you who do not know it, Aberdeen is far north in Scotland and the native accent there can be almost incomprehensible, even to other Scots). Anyway, says the gal, when Max Musto later arrived from Alexandria – the Egyptian one – to open this 180-room luxury hotel, he decided straightaway that this would be the friendliest hotel in Russia. 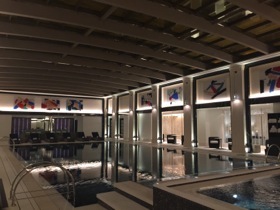 Looking across the hotel’s pool

He has the building to offer friendship. Want the biggest wedding in town? Four Seasons Moscow has the largest ballroom. Want a near-Olympic indoor pool with glass roof that offers daylight, up above the Art Deco frieze? You have it here. People seem to like what he is doing.   On Thursday February 19th, 2015, he was summoned to an evening function at the Lotte Hotel to discover that Four Seasons Moscow is, say the Russian Hospitality Awards, winner of the best new hotel in Russia. Not surprisingly Russians love this hotel, for its history, its location and its friendly staff. 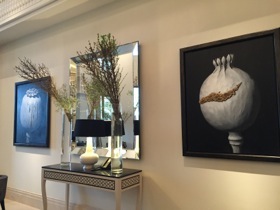 Perhaps they also like the hotel’s Russian breakfast choice, namely fresh juice, cold cuts, syrniki (quark pancakes) with sour cream, honey, berries, Russian bread, buckwheat porridge and, the finishing touch, eggs sunny side up with wild mushrooms and onion. Everyone, it seems, seems to love the relaxed feel of the hotel, with its real fires in the lobby lounges either side of the main entrance, and masses of different seating areas, and lots of art – and flowers – everywhere. Oh these flowers. They provide a lasting memory of a stay here. I am sure everyone also loves the friendly staff, ranging from bellboys in scarlet to a pair of senior ladies in white who do not speak a word of English but do a great job continuously searching for paint-nicks to cover up. 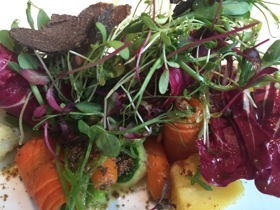 .. and the art of food, a truffle salad lunch (note how the carrots are spiralled strips)

Want the best Italian? Max Musto switched what was-to-be-steaks to an Italian concept, Quadrum, which is open lunch and dinner. Look out at Red Square as you eat, perhaps verdurine e tartufo, a warm vegetable salad, with black truffle, followed by rombo, namely seared turbot, eggplant and zucchini aponata, white wine sauce.   It is all so good that at least one long-time regular at a very-near hotel moved over to stay once he had sampled Quadrum’s dishes. This is, after all, going to be Russia’s friendliest luxury hotel, says Max Musto, with a big grin.