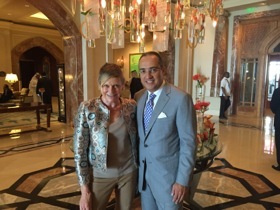 Rami Sayess, GM of Four Seasons Doha, looked pleased as punch on April 29th, 2015. He was shortly to host a party for 300 to celebrate the luxury hotel’s tenth anniversary – see the pop-up chandelier behind him. Nobu had opened 11 nights previously and, in fact 2015 is quite a year for celebrations at the 232-room icon, says the gal. Rami Sayess launched a year-round Shisha lounge, outside but with pull-over roof and glass walls when the searing Qatar summer prevents anyone sitting outside. The lounge has become an immediate success with locals, including groups of black-clad younger women puffing at the shisha hubbly-bubblies. 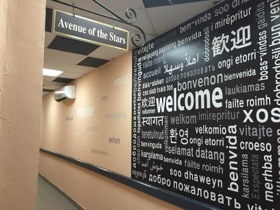 Staff now arrive along Avenue of the Stars

The hotel has also spent enormously on facilities for its 730-strong team who come from 35 countries. They used to have an open-walkway past the sanitation area. Now this is closed in, to a stylish corridor labelled ‘Avenue of the Stars‘. They have a fabulous restaurant, Corniche, with a rest area with work stations, table football and snoozing chairs. The hotel is also spending heavily on making itself even more beautiful for its guests. A new-look is being done by Meyer Davis, the New York studio favoured by Barry Sternlicht: it has done 1 Hotel South Beach. 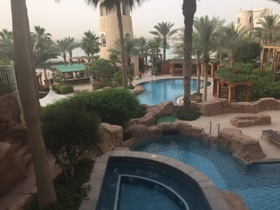 Looking down at some of the swimming pools

For the fit and healthy, this is a thoughtful hotel. A three-floor stone-look fortress, a hundred yards from the main hotel, has a 14-room spa at its base – try a Sodashi facial from May and it somehow comes with an amazingly therapeutic neck and spine massage – and a 24-hour gym (both LifeFitness and Technogym, with lots of fresh fruit) in its middle and beauty and barber at the top. Come out of this wellness structure to walk back to the hotel and you look down over three-levels of pools, and out to the white beach. 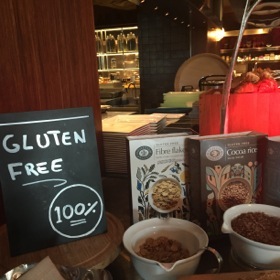 Having dined last night at Nobu, I was keen to try this luxury hotel’s main in-building restaurants. The breakfast buffet selections are huge, with a whole wheel of icing-covered cinnamon buns and about 15 different types of sweet pastry. These were highly popular with local lads meeting up with their buddies, all in pristine, not a single crease, long white thobe (dish-dash), and either white, or red and white ghutrah scarves. Despite a very prominent gluten-free corner, without exception they all went for piled-high plates of those sweet things.