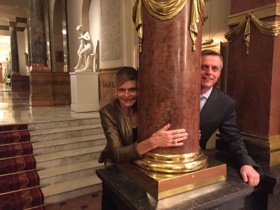 Belmond Grand Hotel Europe St Petersburg GM, Sjefke Jansen, whose parents still live In Heidelberg, is another of the foreigners making this luxury hotel work on a day-to-day basis – the third of the trio is the French F&B director. Last time the gal saw Mr. Jansen on duty he was in floral shirt and chinos, running a resort in the Indian Ocean. He is still tie-less but so happy to be back in a city, without the 24/7 demands of long-stay beach-sun-and-booze guests, many of whom were actually Russian. He feels absolutely at home here in Russia, where at least half of his hotel guests are discerning Russians (perhaps some of them try the hotel’s signature St Petersburg sling, a blend of gin, fresh blueberry and crème de cassis?). 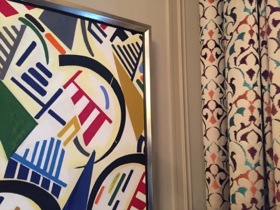 Detail in the Kandinsky Suite

The now-265-room hotel recently converted 19 smaller suites into nine sensational Historic Suites on the gracious, high-ceiling second floor (US-style) that is a feature of traditional Russian buildings. Adam Tihany was brought in to redo these suites. I am in 142, a 1,600 sq ft beauty named for Kandinsky. Look how curtain fabric echoes a wall painting, and the same can be said of all the furnishings and one-off throw rugs on the highly-polished parquet floor.   Even a bowl of massive blood-tipped orange roses on the six-seat oval dining table echoes the bright orange upholstery of the high-backed chairs. 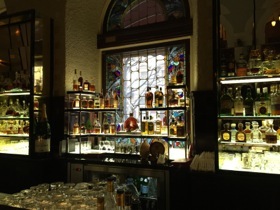 What a change from how the hotel must have looked in the 19th century when two adjacent hostelries were united in 1824 by an Italian, Carlo Rossi (in 1875 the current façade was added, and January 18th, 1875 is celebrated as the main ‘birth’ of the hotel). But there is constant change here. A new pan-Asian restaurant opens shortly. The 24-hour bar, which not surprisingly attracts some nocturnal imbibers, now has its drinks list, and suitable snacks, listed on iPads – but I bet Boris and Vladmir and Yuri simply give their orders direct, and verbally, to the charming people serving behind the bar. The most famous restaurant here, L’Europe, which seats about 250, was closed last night for a private birthday party, possibly one of the events that would have gone overseas ‘before the sanctions’. 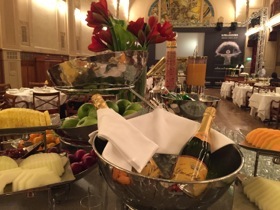 L’Europe, with its Art Nouveau stained glass end windows, was designed by Karl Makkenzen in 1905. Tonight this luxury hotel will host, here, the Russia-CIS finals of the worldwide San Pellegrino young chefs’ contest. Today, after working out in the private gym of 152, the Presidential Suite that has been opened for me specially, I head down for its famous breakfast. Looking at the strawberries on the buffet (sanctions? what sanctions?). The photo does not show the arrangement of different, well-labelled drinking yoghurts – or the beetroot juice, which of course I devour.