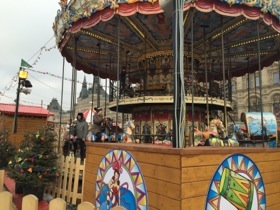 And, indeed, the gal leaps out of bed – well, rolls over, rubs her eyes, is it REALLY that time already? Here at the luxury Baltschug Kempinski hotel it is still dark outside, the view across to Moscow’s Kremlin and Red Square illuminated as it was last night. But a few hours later it has come to day-time life. Time to take a walk over Moskvoretskiy Bridge, crossing the Moskva River – yes, this was the very bridge that Boris Nemtsov was walking over. Ten minutes’ walk leads me to Red Square, and St Basil’s and beyond, before getting to GUM department store, there is a small circus, with roundabouts and other excitements associated more with Christmas than Lent. 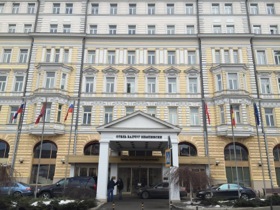 Back at the hotel, I look again at its façade, gloriously painted in softest hues at the top, eighth floor, and brighter down to the ground. The 230-room hotel, mostly owned by a Bratislava-based company, with a quarter of it held by Kempinski, looks like an epitomal Grand Hotel (although the fictional Grand Budapest Hotel, in the movie starring Ralph Fiennes, with Adrien Brody, Jude Law, Bill Murray and Tilda Swinton, was at the top of a mountain). At this ‘grand hotel’, the Baltschug, many of its employees have been with it for ages. My friend Helen Gorbunova was here when it became Kempinski in 1992. 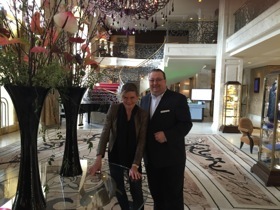 Oliver Eller, on a Saturday, in the stunning new theatrical lobby

But the interior has changed dramatically. What used to be a cold waiting-room-kind-of-space is now a theatrical platform. Even the staircase, leading to the upper meeting-room floor, has been turned through 180 degrees, and I love the way its curves are echoed in the Art Nouveau patterns on the new carpet (it was formerly just plain marble here). Oliver Eller, the Hannoverian who runs this hotel, comes in on a Saturday – which for a German is not the norm, please note. He loves Russia, is married to a Russian, has a half-Russian son. Please tell the world to come and visit, he says. With the state of the ruble, the US dollar now goes twice as far as before. There has never been a better time to come to Russia. 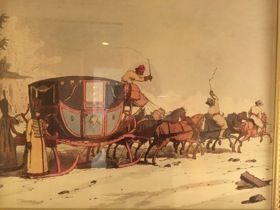 A wall-print, ideal for a busy traveller

I head up to the luxury hotel’s suite 410, for a last look out across to the Kremlin, Red Square and St Basil’s. On my way out I notice a print of troika racing, taking a sleigh on the frozen Neglinka River, then along the Moskva River and along the Kremlin walls. In such a race, I read, troikas could get up to 30 miles an hour – poor horses. I am leaving Moscow by less romantic but by even faster means, on a B-777 bound for London.