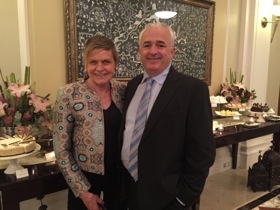 Michael Pownall gave up running some of the best luxury hotels in The Americas – Sandy Lane in Barbados, and Keswick Hall outside Charlottesville VA – to come and open Taj Cape Town, a conversion of historic buildings that include the former Reserve Bank of South Africa. It was not easy, says the gal, to introduce a new name to the South African scene, and did Cape Town really need a substantial city-centre hotel? The answer, after five and a half years, is definitely yes. Head into the 176-room hotel’s soaring and vast lobby and there are people meeting, greeting, all day long. 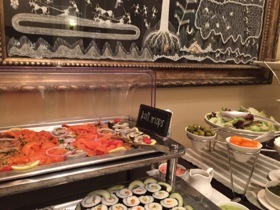 Breakfast with an Indian backcloth

What was formerly a kiosk in the lobby is now a very clever wine-tasting room, to taste and buy. You can also head next door to the hotel’s Mint casual restaurant, which has a glass-walled wine cellar that reaches up to its two floor-high ceiling. I love Mint at breakfast. The buffet stretches next door to the lobby (sashimi and sushi in front of an Indian print), and the classic music that wafts through is very soothing. Many business people breakfast here – later in the day they might well try the hotel’s Bombay Brasserie. 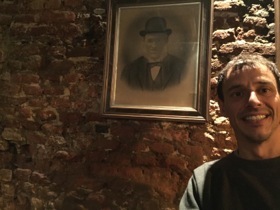 But obviously people do not spend all their time in the hotel. We headed right, along Wale, to a hole in the wall that said something like chocolate café. There was no proper name to what seemed like a pop-up eatertainment place with solid walls around it. Michael the chocolatier sells his chocolate bars, and he has expanded to the back of that part of the building. Go about ten yards to the rear, to a courtyard (about 20 by 20 feet). This, and the tiny-tiny roofed-in room behind – apparently a working mortuary until not long ago – constitute one of Cape Town‘s must-visit hipster hang-outs – a Gin Bar. 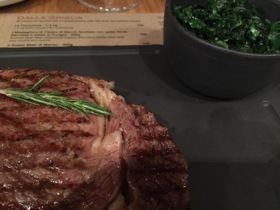 As well as the usual range of global gins, there are four local cocktails. I had Ambition, namely a Coarum Gin with thyme, cucumber, cinnamon, stirred with Fever Tree elderflower tonic. Apparently this curbs impulses, and lust, and promotes career advancement … good going, gal! We went on to Carne, for great South African beef served Italian style (a ribeye is La lambrate di Manzo). And then I went back to my luxury hotel for a great night’s sleep.