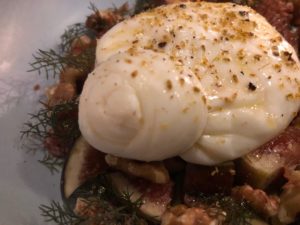 Sydney has a plethora of luxury hotels and the fact that one far exceeds its peers in terms of rates and reputation spurs the others on.  The gal was thrilled to see how Four Seasons Hotel Sydney has picked itself up from the doldrums of years with no investment and GMs who too often changed restaurant concepts, none of which worked.  Now, under seasoned foodie Bahram Sepahi, MODE Kitchen and Bar is really a success.  It occupies what was once a tea lounge at the back of the ground floor lobby of the 1982-vintage hotel.  Now partitioned off, with frosted glass, and anchored by a massive real-log wood oven and a big open cooking area, it is inviting, and locals love it. 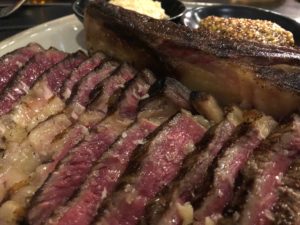 MODE’s Manager, Amanda McDivitt, has come in from freestanding restaurants (just as The Pierre found in New York, a woman with such experience helps a hotel restaurant enormously).  She is complemented by a real Italian chef, Francesco Mannelli; as a result my fresh burrata on a melange of figs, roasted walnuts and fennel pollen, was delicious, as was my following ribeye, from New South Wales of course (five-week aged, with a side of cauliflower cooked with truffle emulsion).  There was just time, after dinner, to see one of the new-look bedrooms. Gone are the green and floral images of yesteryear.  Now the 531 rooms are taupe and teal, with mirrors to maximise every space: designer Miriam Fanning of Mim Design has worked with a Bali bits-and-bobs procurer who has added some just-right ceramics, and amusing foot-high wire-outline shapes of cyclists.  Yes, the effect is fun. 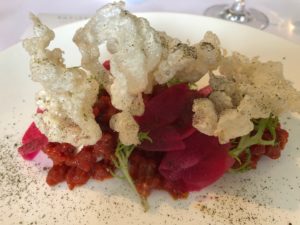 The same word could be used for Sofitel Wentworth, the city’s venerable institution that goes back to 1963 when Qantas bought an old Wentworth hotel, named after the explorer and statesman William Charles Wentworth (he started a newspaper named The Australian, but no relation to today’s newssheet).  The airline wanted a hotel for its VIPs, but they built it in a different location, on Philip Street, merely cannibalising its name: funnily enough it still has an airline connection as it houses Emirates crews and, as of May 1st, British Airways. OK, where is the fun?  Well, as I entered the lobby a male of at least 80, a sage with long white Dickensian locks, was playing a grand piano. 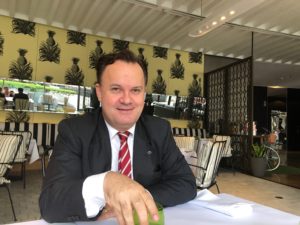 It turned out he was one of the guests attracted to this hotel just because he CAN tinkle to his heart’s content …. Philip Logan, the GM of this 436 room hotel, knows he has an advantage being part of Accor, which has over 150,000 club members in Australia.  I took the opportunity, when lunching at Sofitel Wentworth, to go very-Aussie, in fact very New South Wales, with beef carpaccio folllowed by a Binnorie-feta salad, from Lovedale in the Hunter Valley.  Philip Logan told me that on September 7th, 2019, by contrast, the food at this luxury hotel will be all French. Alain Ducasse and Guy Savoy will be guest-cheffing at a dinner Atout France, which attracts tourism to France,  is hosting for 400 of Australia’s travel community.