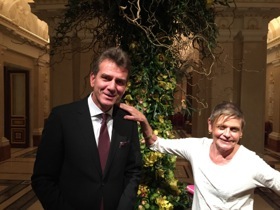 Martin Rhomberg is the big-boss of the sumptuous luxury hotel that is Four Seasons Hotel Lion Palace St Petersburg and he is having the time of his life (well, at one time he was opening GM of Four Seasons Caracas, which he then had to close a year later).   Here, he has so much beauty around him. Look at the ceiling-high tree of orchids, the main meeting point of the lobby of the 183-room hotel. All the flowers are orchestrated not by Four Seasons’ ‘usual’ floral creator, Jeff Leatham, but by the marvellously-named Vincenzo d’Ascanio, who also apparently supervised the floral art at Four Seasons in Florence, Milan and Moscow as well as Belmond Cipriani, Venice. 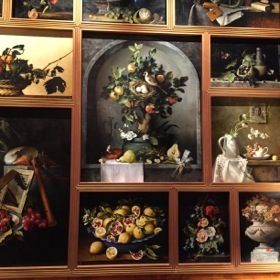 There are other flowers, too, as seen in the collage of one wall of Xander Bar. All the food and beverage opportunities are on the lowest floor, with outside entrances, and all feature connecting smaller rooms, for uniqueness and intimacy. Xander, for instance, has one room that has a wall of painted tiles showing Old Dutch floral still life – in an adjacent room there is a similar collage, of sailing ships of yore. Sintoho, the Pan-Asian restaurant designed by SPIN, has rooms that look like Murano encased in rich red velvet, and panelled private dining areas. Percorso, the Italian, features a glass-walled working kitchen in one room, and an enormous real-log working fires elsewhere (it is also SPIN). 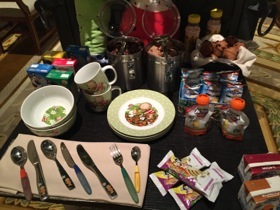 Kids for All Seasons, at the breakfast buffet

The hotel’s restaurants are really popular with local expats – a big party of Chinese is dining in Sintoho – as well as locals, and Russians from all over the country who now tend to holiday at home rather than surmounting rigorous hurdles to head overseas. Russians, just like parents the world over, do travel with their kids, and I loved the little ones’ buffet station in the central winter garden conservatory. But then I loved so much about this place. The gym, for instance, has six of its main Technogym bits arranged radially around a three-tier Murano-type ceiling-hung chandelier. The edibles in my minibar are from Hédiard… oh, this brings the story back to suite 125, named for the Yusupov family. 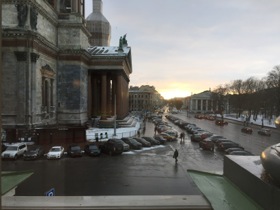 In summer, the view from this luxury hotel could be over the green and gorgeous Alexandrovsky Gardens, but at this time of year it is all snow-bound. Since this is a corner suite, I can also look across to St Isaac’s Cathedral. One admirable feature is that this luxury hotel is located centrally for St Isaac’s, the Hermitage and the River Neva, and also for Kazan Cathedral, which I love for its continuous line of worshippers, all ages, both sexes. If always makes me very humble, and transitory, coming back to Super St Petersburg.