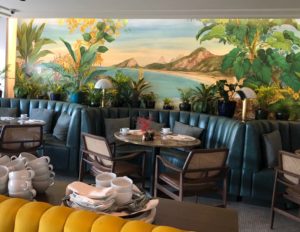 Andrea Natal, in charge of the iconic Belmond Copacabana Palace, is always creating (not the same as improvising – everything she does is well thought out).  At the moment she is about to start renovating the 400-seat tiered theatre that is part of the rear of the hotel: her communications supremo, Cassiano Vitorino, took the gal on a hard-hat tour, above. She is also getting into creative mode for the mammoth Gucci store, attached to the front of the hotel and opening on to Avenida Atlantica, that will replace the current H. Stern, which will relocate inside the main building.  She has already finished redoing Pérgula, the all-day restaurant that offers inside and air-conditioned, or outdoor, poolside. 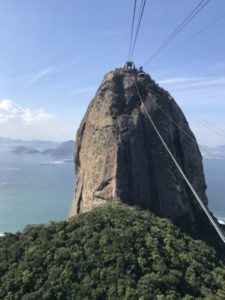 Still remaining is Pérgula’s superb trompe l’oeil shown in the photo on the upper left: it was done by French artist Dominique Jardy in 2017, 20 years after she produced similar stylized local views for other public areas, including behind what is now the chocolate stall in the main lobby.  Pérgula’s overall new-look was tweaked by a Belmond favourite, Muza Lab, no not Inge Moore, who did such a splendid job on Belmond’s Andean Explorer train, but one of her colleagues. Next time I return here I will hope to dine once again at MEE, the Asian restaurant that is overseen by Ken Hom. And I have promised Cassiano Vitorino that I will do a Sugarloaf Mountain climb with him: perhaps if I do make it my photo might be added to the 128-strong rogues’, sorry VIPs’ gallery.  Already there is more to do here than ever before.  The hotel always had Caloi bikes which it rented out for the beach circuit, along the length of Copacabana and back, over four kilometres.  Now the surroundings are not quite literally but quite obviously littered with put-in-rack and also with drop-anywhere bikes. 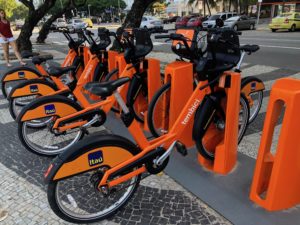 There are put-in slot and drop-anywhere bikes, and electric scooters

I did not see any drop-anywhere electric scooters, thank goodness.  The news that electric scooter startup Bird has been the fastest company ever to reach US$1 billion valuation is scary.  The scooters are potentially dangerous and they need armies of workers to find them, wherever they have been dropped, and charge them every night. No, on this trip to this vibrant city I was happy merely walking along Avenida Atlantica and seeing the sights, whether human or weirdly artistic.  As always there were opportunists building elaborate sandcastles in the hope of a few bills, especially greenbacks, fluttering their way. 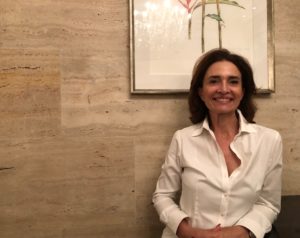 It is easier for Americans to come here now since eVisas are so speedy – those flying back to the USA, or even to UK, need to know ahead of time that the American Airlines airside lounge is one of the most gracious anywhere, with super food and a good choice of wines, all served in full-size Chef&Sommelier glasses.  And yes, even though I ate, and drank, superbly at the unforgettable Belmond Copacabana Palace, I, like many, was still a little peckish when we got to the airport, though a mostly-stationary 75-minute traffic snarl.  My lasting memory, however, is of Andrea Natal miraculously appearing by front desk to say farewell.  Now THAT is one of the signs of a true luxury innkeeper.

AND NOW SEE VIDEOS OF BREAKFAST, AND WALKING ALONG COPACABANA