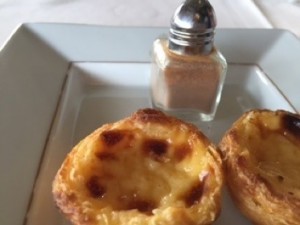 A typical tart, with shaker of cinnamon

At her first meal back in Portugal the gal was offered a bite-sized custard tart, with a shaker of cinnamon to put on it. Thereafter every meal in the luxury hotels l visited had custard tarts and if you walk the streets in the centre of Porto every one of the cafés and coffee houses has custard tarts. It does not matter about the time of day, or whether you have just eaten. Custard tarts are the order of the day. Apparently they started when there was a surplus of egg yolks, thanks to so many egg whites being used for the crispy-starched wimples and other ecclesiastical regalia found in the many convents and churches in olden days. What, one wonders, are the egg whites, now a secondary rather than primary part of the egg, used for today? Our chef makes lots of meringues, says one hotel with pride. 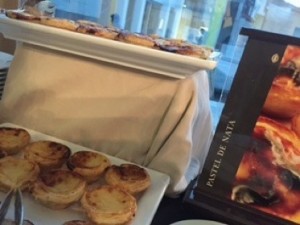 They are even on the breakfast buffet

Locally each is called pastel de nata – plural is pastéis de nata. You find them everywhere in destinations with Portuguese influence, Angola, Brazil, Macau, Mozambique and more. Some say that the best tarts in Porto are at Nata Lisboa, ‪Rua Santa Catarina 499: as a reviewer says ‘ We tried pasteis de nata at a different cafe every day for a week in Portugal. These were the best. Served warm, with just crisp pastry, a wobbly filling, and cinnamon to dust the top. We immediately ordered two more. If I lived near here I would soon be fat.’ But the interesting thing is that despite many Portuguese being of the short-squat shape, I did not see many who had obviously been eating too many tarts. Reason? Respect for food, and having to walk up, and down, incredibly steep side streets might help.

Some hanker for the Algarve…

The tarts were even on the breakfast buffet. Now I am 100% in favour of buffets at breakfast. Until you see what a hotel’s pastel de nata, or croissant, looks like on a buffet, you really do not want to order it, sight-unseen, from à la carte. Yes, there were pastéis de nata on the breakfast buffet at InterContinental Porto Palacio Das Cardosas and I am sure there are, too, at the main Algarve resorts, along the south coast of the country. I did not visit Algarve this time. Its devotees go for sun and golf rather than the extreme physical challenge I had of tree-climbing in the Douro Valley a couple of days ago (come to think of it, the only time I have ever flown in, and out, of Faro was when I was writing about airline food, in years far far back, and I flew in and out without disembarking). 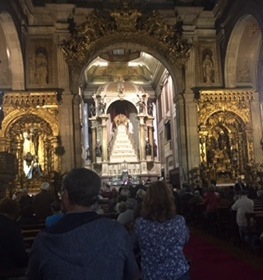 .. but I prefer the historical depth of Porto

No tree-climbing, but Porto is full of history and culture. From my luxury hotel, I walked straight out into Praça de Liberdade, toured its periphery and took some side tangents. I went into two churches, both elaborate theatres for the pomp and circumstance of ceremonies. And we are talking about full churches 11 a.m. – on a Monday.