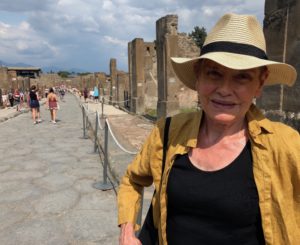 The reasons the 220 passengers were on Ponant’s Le Lyrial, sailing from Rome to Athens, were myriad. Tempted by the cruise theme, Treasures of the Mediterranean World: a Family Learning Adventure, many were family parties, typically three generations. Others were there because they joined a New York Times special, and yet others were followers, or board members, of the Archaeological Institute of America. But there was a common link. All were enticed by the quality and luxury offered by the Ponant boutique cruise line, as well as the chance to learn about ancient history.  It was an intriguing itinerary. We started off, still in Italy, by mooring in Salerno for Herculaneum and Pompeii. Herculaneum was discovered in 1738 and Pompeii – or Pompei, either way it means ‘five villages’ – ten years later. We had a memorable day, slightly marred by a prior visit to a tourist-oriented cameo factory (who wants cameos these days?). 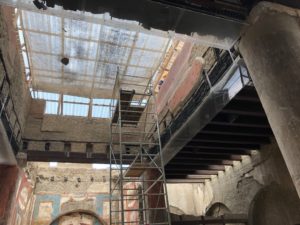 I also choose to forget that, between the two brilliant archaeological sites, we had what could well be the worst lunch experience in the whole of Italy, at a food ‘factory’ outside Pompeii which served unidentifiable protein and the wine glasses remained unfilled. The guide in my group, the excellent 59-year old extrovert, Antonella told us how the Vesuvius eruption in 79 A.D. took 19 hours to layer 20 metres of ash, rocks and lava everywhere. As evidenced by motley collections of skeletons jumbled anyhow at Herculaneum, anywhere, the people could not escape. 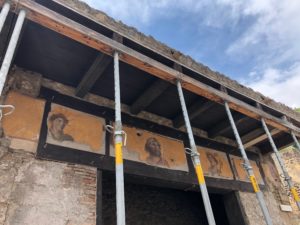 They were literally overwhelmed. Herculaneum, then by the sea, was the richer of the two conurbations: it had a sewage system, and the houses were larger, with big gardens and separate kitchen areas at the far end.  What did they eat in those days?  Some of the younger members of my group turned their noses up when Antonella listed garum, sun-fermented fish. They also ate dormice. We saw fragments of blue marble, from Afghanistan, at Herculaneum. Now, thanks to the eruption and the passing of time, that prosperous area is inland. Pompeii, never by the sea, was not so rich. 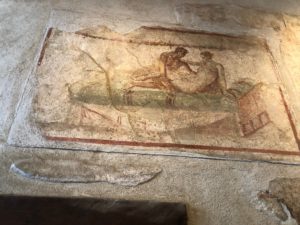 Oh so many frescoes

Pompeii had no sewage systems, so streets had raised sidewalks with big stepping stones to get across the omnipresent ‘muck’. The challenge with two memorable sites in quick succession is to remember which place is which – the same thing happens in Japan with Hiroshima and Nagasaki, both of which are gut-wrenching emotional experiences.  Here my impressions of Herculaneum and Pompeii have already blended, but I have an overall memory of a fruitful quince orchard, and, definitely at Pompeii, of the gladiator school, the bath house and the brothel street. And everywhere, frescoes and more frescoes. We saw so much today. The kids taking part in Ponant’s Young Explorers programme, by the way, loved their day: they did a shortened Pompeii, plus visiting a highly-productive small family-run farm and they learned how to make pizza.  Talking of food, Paul Roberts, who in 2012 curated the block-buster Life and Death in Pompeii and Herculaneum exhibition at the British Museum in London, has come up with another winner. Last Supper in Pompeii, at Oxford’s Ashmolean Museum until 12 January 2020, is getting 10/10 reviews. You learn about Pompeii residents’ craving for garum, fermented fish sauce, you see a glirarium jar for fattening dormice, but overall you understand where ancient Roman acquired their dining skills. HERE IS MY HERCULANEUM OVERVIEW VIDEO