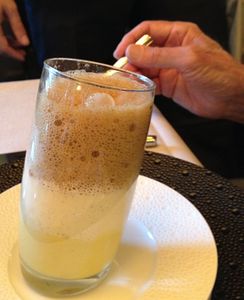 Not what is seems, a bouillabaisse shake..

The result of having local restaurateur Lionel Lévy running all the food at the south of France’s newest luxury hotel, InterContinental Marseille – Hotel Dieu. is that eating there is sensational.  And, as the gal found, nothing is what you might expect.  Everything is a delightful surprise.  Dinner in Les Fenétres was a sell-out, even on a Sunday night.  At least one diner at every table had the chef’s signature bouillabaisse shake.  Really, OMG… it comes as shown, in a Tower of Pisa glass.  There is fish at the base, the bouillabaisse stock above, you stir it all up and spoon it up. One local lady had it six times in three weeks. 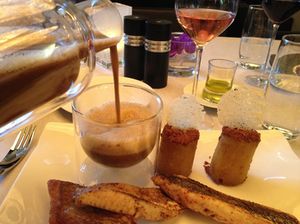 After that it was time for bouillabaisse as a main course.  The dish – bolhir, to boil, plus abaissar, to simmer – comes from here, typically with at least three kinds of fish, red rascasse, sea robin and conger (plus, perhaps, bream, turbot, monkfish, mullet, hake, sea urchins, mussels, crabs, octopus and even langoustine). The fish are added one at a time, for perfect cooking.  Locally, the broth is served first, in a bowl with bread and rouille.  But look what happens here!  A china tray has a glass with rouille at the base. There are perfectly-cooked bits of fish, and two standing towers, formed of potato wrapped around more rouille.  Pour in broth from a double-sided glass ‘thermos’ and you are away.  OH what taste. 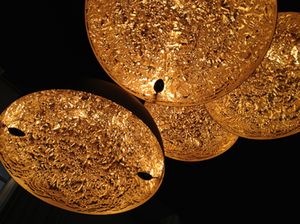 Look up at gold-lined ‘woks’, three feet across

There are constant surprises in this amazing hotel.  Sitting in Le Fenëtres restaurant, you look up at what look like wok covers, about three feet across.  There are 24 of them in all, hung in groups of four from the high black ceiling.  The under-side of each ‘wok’ is unique, of hand-beaten gold.  Two ‘spoon shapes’ protrude from the circumference of each shape, and in the upper ‘bowl’ of each light reflects upwards, to illuminate the entire thing.  Apparently these are Italian (the restaurant lights are Italian, the designer of the whole sensational hotel is a Parisian, Jean-Philippe Nuel, who also did Le Parc in Paris, and Jiva Hill, outside Geneva). 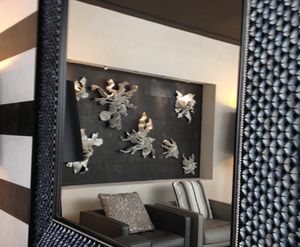 More of the surprises …  from the restaurant level, take 35 steps, or one of two mirror-fronted elevators, back down in the lobby, some wall panels are formed of solid granite on which are hung dozens of big ‘sea urchins’, made of ceramic.  There are mirrors throughout the hotel (a ten foot high by 20 foot across on in the gym, and ones half that size propped against walls of upper-floor elevator lobbies).  The lobby has a mirror, as shown, where the frame is formed of real mussel shells. 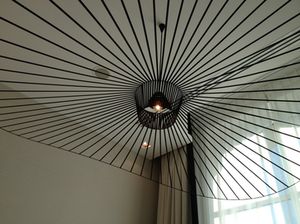 The presidential suite, up on the top, seventh, floor of the hotel, has an 800 sq ft terrace for outside entertaining and sure enough a big party was held there the other night, for Russian travel agents – there is a new direct Air France flight, Moscow to Marseille.  I had a good look around the suite, which has a sexy six-foot bright purple chaise-longue next to the freestanding tub in the master bathroom.  Look up, while you are in that tub, and you see a metal framework twirling overhead.  This is a chandelier based on traditional Provençal skirts of times past. 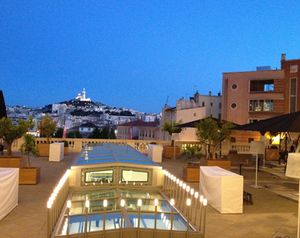 A glass-topped ‘boat’ is cover for the lobby’s skylight

Yes, many things are not what they initially seem to be, here at this luxury hotel.  Come out of Les Fenêtres restaurant after a bouillabaisse marathon – no, there is no bouillabaisse icecream, yet! – and it looks as if you are looking at a glass canal boat.  This is in fact the upper view of the skylight of the lobby atrium, just below. The ‘boat’ appears to be sailing down to the Vieux Port of Marseille, watched by Notre-Dame de la Garde on her distant hill.