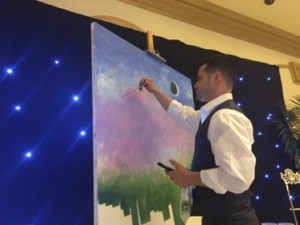 An artist paints a blank canvas…

At Virtuoso Travel Week, August 9-13th, 2015, over 450,000 four-minute meetings were held, driving around $450 million in immediate sales (two percent of most travel advisors’ clients are responsible for 20% of sales). These are the customers that luxury hotels around the world are keen to attract. For the duration of the Week, at all hours of the day and night, hoteliers snatch the odd moment with their favourite travel advisor partners, who are entertained lavishly. Destinations and tourist boards also host. A lovely touch, says the gal, was an artist painting what had been a blank canvas as 1,300 people walked along a tiny part of the miles of corridors at Bellagio towards what is called the Destinations Dinner, this year themed Inspire. 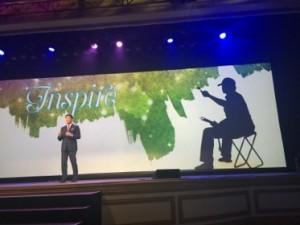 And there, at the back of the stage, was a similar work providing a suitable backcloth for Virtuoso‘s Matthew Upchurch and Albert Herrera to announce winners, including tourism board of the year New Zealand and best escorted tour company Tauck, which had kindly sponsored the evening. Table hosts, by the way, decorate their round tables imaginatively – Australia‘s had wallaby toys and RM Williams Akubra bush hats, and on the Paris table there was an illuminated mini Eiffel Tower. There were also, during the four days, 539 special events, including cocktail parties in cordoned-off areas of main corridors. 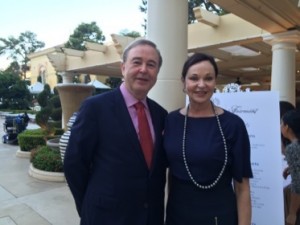 FRHI international President Jennifer Fox hosted breakfast on two mornings – at 6.15 a.m. Choose your smoothie, and granola with yoghurt or full-American (English fry-up with rösti) and lots of coffee. Four Seasons had 55 people going round the speed-dating tables, allowing, at each, four minutes to talk to each seated travel advisor: Four Seasons also hosted a breakfast, plus four lunches and three cocktails. Belmond holds an orange-dress cocktail on Monday: cleverly, Corinthia London, The Jefferson in Washington DC, and Honolulu‘s Halekulani take a suite to entertain 200 of their top travel advisor partners. Tuesday is the biggest cocktail night – one of the most enjoyable hotel receptions was IHG‘s, in a high-up suite, and with plenty of super GMs. 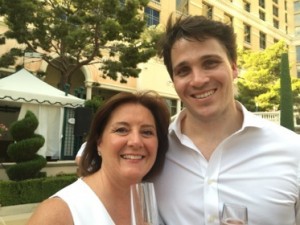 Tuesday’s top on many luxury hoteliers’ calendar is the white party, poolside at Bellagio, hosted by TravelWeek in São Paulo – since this is now owned by ILTM it has evolved into an ILTM party. All ILTM guys were in white Capri shorts and shirts, and even some of the hoteliers invited got into the act (those who arrived in full grey suit-gear must have been really uncomfortable as it was mid-90s and jolly humid). Sadly, I had to leave early for a dinner. Another one.