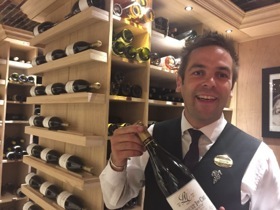 No memories of the luxury Constance Le Prince Maurice hotel would be complete without at least a mention of Jérôme Carlier, honestly one of the most appealing and funny sommeliers in the business (wait for it, the Constance group has 46 sommeliers total, in their seven hotels). Constance takes wine tremendously seriously, and this particular hotel has a wine cellar with 25,000 bottles, and seating for tastings, or dinners, for 10. After listening to him for only a few seconds, the gal was convinced Jérôme Carlier would be able to sell a teetotaller a bottle of 2009 Montrachet GC E Sauzet for $ 300,000. 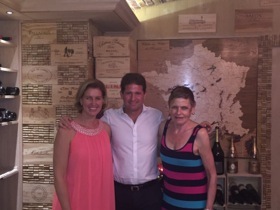 I was dining at the hotel’s Archipel with Andrew Milton, COO of the Constance Group, and his wife Alex. Both are old Mauritius hands. Where do they go on holiday, with their 11-year old daughter? A South African safari with &beyond has just come up trumps, and now we talk about where they should go next. I ate my fish of the day and we drank a South African Tinta Barocca grape, the Sadie Family’s Treinspoor 2013 from Malmesbury, and then Jérôme Carlier took us on a tour of his cellar. Such a treat. 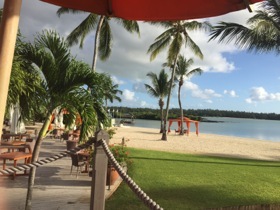 View from breakfast and

In the morning, I watched the sun come up, and sat out on the terrace of Archipel, looking out at the beach and the ocean. Another resort’s manager tells me that he recently had two male guests who literally got into a physical argument about reserving beach chairs – no prizes for guessing where those guests came from. Not here. The market here is well behaved and somewhat subdued. 23 percent of those staying here are from UK, followed by France and then Switzerland and, somewhat to my surprise, a couple typically has six ‘devices’ between them. At one of the buffet counters, a man is cutting fruit to order, and it is good to have local jams, from Poivre d’Or. 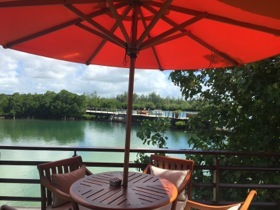 .. view from one of my two over-water terraces

I go back to lovely villa ten, a total of 1,400 sq ft inside, with two outside terraces overlooking a mango creek. I like having four different soaps, all labelled – my favourite is sandalwood. I like the way there are brown Hermès-look leather boxes, lined with orange leather, to hold things, and notepads are in orange leather covers. Stationery envelopes, which of course are self-seal (as they should be at all luxury hotels) have grey interiors with big orange 1810s. This, apparently, was the Battle of Grand Port, the only French naval victory during the Napoleonic Wars. In my car, on departure, a farewell card awaits, this one marked 1747, which I now know was when, after 12 years of adventures, Bertrand-François Mahé de Labourdonnais left was then Isle de France, now Mauritius.