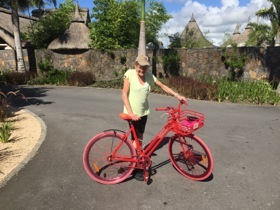 After the scarlet telephone boxes, here is more red at the LUX* Belle Mare luxury resort in Mauritius. I had not come across Martone city bikes before. For serious cyclists they are probably a little laughable but as city bikes in hotels with flat land around, they are perfect, easily seen by motorists, and their tyres seem indestructible. I also like the big bakers-boy ‘basket’ on front. My bike had my initials on it front and back and since 1212, Villa La Mer, is right down on the beach, it is also furthest from general action so I used the bike a lot. 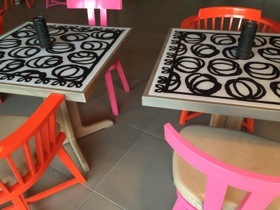 The extensive 2014 renovation of the hotel was done by the brilliant Kelly Hoppen, and in her honour the main bar, a palapas thatched affair with open sides, is now called K Bar. As well as a big sit-up counter there are lots of low tables and bright pink and orange chairs. Nearby, also next to the main pool, is an old-look rum shack, Mari Kontan, with 112 rums, all from the Indian Ocean. OK, want to eat? Vineet Bhatia‘s Indian-with-a-twist is Amari by Vineet, dinner only. There is Chinese at Duck Laundry, which has a glass-sided kitchen. I absolutely loved Beach Rouge, which switches from lunchtime turquoise (uniform tunics, table settings, lighting) to dinner scarlet, including scarlet Guy Degrenne china. 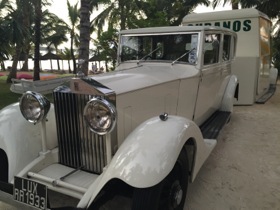 And there is the breakfast, lunch and dinner MIXE, with at least seven buffet stations, if not more. For lunch, alternatively, try this food truck. Yes, it is a real 1933 Rolls Royce, but not exactly going anywhere, though it looks as if it is ‘pulling’ a truck named El Jefe, after the food truck in Jon Favreau’s 2014 movie Chef, starring Robert Downey Jr, Dustin Hoffman and Scarlett Johansson. I am sure I have forgotten some other eating venues – yes, what about the Tea House? This is an exquisite emporium, with tastings, from delicate glass pots, of teas from 44 countries. 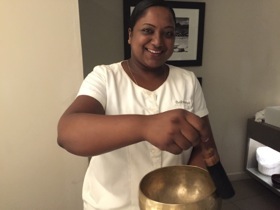 Sabrina in the spa

Tea House is right next to the spa, which makes it a popular post-treatment venue. LUX* ME, the 12-room spa, is all taupes and real greenery. Whereas far too many hotel spas’ jacuzzis and saunas are tucked away, here the big water and steam facility is a really convivial outdoor venue. I had a brilliant session with therapist Sabrina, felt a million dollars afterwards, so much so that instead of a cup of tea I actually felt more like a glass of Popcap, the hotel’s bespoke South African sparkling, by Steenberg (all 13 of LUX* special wines are overseen by Kent Sheermeyer, who is based in South Africa). 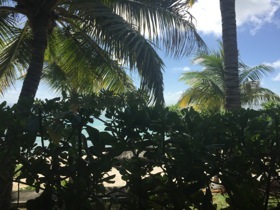 You see, it really is difficult to do justice to this fun luxury hotel. I have not even mentioned villa 1212. It has a heated plunge pool. The window by the desk looks right out at sand and, 20 yards away, the ocean. I have Taschen books galore, and a pantry, and Kelly Hoppen has stuck six white hats on one wall. What more can I say?