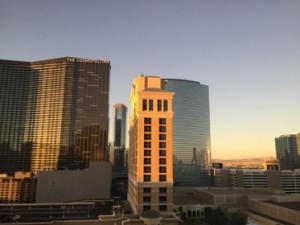 This was the gal’s Las Vegas wakeup view in Bellagio, a luxury hotel that is more like a city merged with Grand Central rail station (although Grand Central does not have plush carpets and the like). You notice there is not a lot of green out-a the window. There is not, anyway, much natural green around, although there was in the past. In 1829 a Mexican named Raphael Rivera was heading north to Los Angeles along the Old Spanish trail from New Mexico. He came across artesian wells with extensive green areas and called the area Las Vegas, ‘the meadows’. Fast forward to today’s megaresort luxury hotels: the first was The Mirage, which Steve Wynn opened in 1989 (he sold $630 million in junk bonds to open the 3,044-room mammoth). 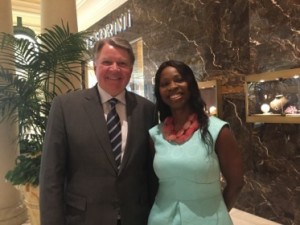 Bellagio, home of Virtuoso Travel Week, opened in 1998 on the site of the old Dunes casino. The idea of Steve Wynn, its architects were Jon Jerde, DeRuyter Butler and Atlandia Design, with interiors by Roger Thomas, now head of Wynn Design and Development. Its opening party alone was said to have cost $88 million. Today, including the Spa Tower added in 2004, it has 3,950 rooms. Owned by MGM, it is looked after with tender loving care by Bellagio President Randy Morton, and former Ritz-Carlton long-timer, GM Olivia Brown, both of whom happen to be Canadians. They both do an above-par job of walking the floor, not easy in view of the size of the place. The ground floor casino, which you have to go through to get to elevators, is 116,000 sq ft. As well as hotel guests, by early evening there are generally around 20,000 passers-by who have come in to see what is going on. 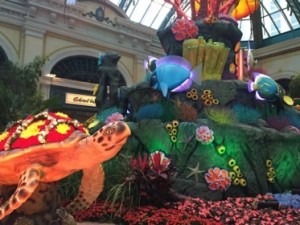 A display in Bellagio’s lobby conservatory

And there is, always, something going on. Even at 3 a.m., on the day I had to leave, there were a couple of dozen people at the tables or the slot machines. There is a veritable army of night workers among the total 8,200 employee complement: those on duty at night are not only security but flower arrangements doing 15-foot high assemblages that would make Chelsea Flower Show seem mid-scale. There is also heavy polishing of the acres of marble flooring, and weekly serious shampooing of the aforementioned plush carpets. For Virtuoso, by the way, the Morton-Brown team arranged for the gym to be opened an hour early, at 5 a.m. – and it was noticeable that it was used, even at that early hour, which shows how seriously travel advisors, especially the younger ones, and some hoteliers (well done Gleneagles‘ Bernard Murphy and Shangri-La‘s Brian Windle) realise the necessity of keeping fit in order to survive the Virtuoso Travel Week schedule. 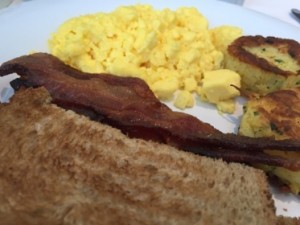 During the Week, too, this luxury hotel not only managed such mammoth events for the 4,842 attendees as breakfasts, lunches, cocktails and three special dinners, but nearly all of the 539 extra, privately-hosted events. All the menus had to be different, exciting and, presumably easy to prepare. I went to one of FRHI‘s pool-side breakfasts. We had a choice of smoothie, platters of fruit and baked goods, and choices of main, granola or a full-American breakfast. Here it is, travellers of the world unite. Call it whatever you like but Bellagio eggs and bacon, here with a cheese pudding and a rösti, really is the global breakfast, whatever you call it.