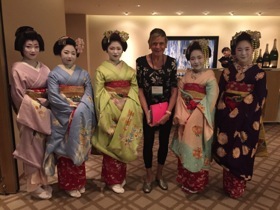 The evening events at the annual ILTM Japan, held in Kyoto March 16-18, 2015, were spectacular. First night was hosted, as always, by Ken Yokoyama, GM of the city’s longest-established luxury hotel, Hyatt Regency Kyoto, which laid on a taste of Japan. The gal was greeted by geishas, whose mama-geisha, a prim granny-type in a subdued kimono, stood nearby. The geishas later performed what geishas do, moving magnificently, and dancing in a constrained way as a result of the corset-like apparel that keeps their backs upright. They can bow, of course, but then even foreigners find themselves bowing automatically after only a few hours in this fascinating country. 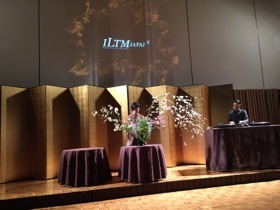 .. which also laid on an ikebana dance (sorry, display)

In the main party room, Yokoyama-san had programmed quiet Japanese music, and a display of ikebana. Watching a young man, in his kimono, lovingly touch each bough of proffered cherry blossom and other flowers, you could understand how he was turning each into art. The result was, well, just right. And at that the sake flowed, and the chefs preparing sashimi in front of us all could barely keep up. Foreigners come to Japan for many things, including food. That night, where guests included Hyatt’s President for the whole of Asia-Pacific, David Udell, was protein-overload, with sashimi, sushi, nuggets of grilled-to-order wagyu beef and so on, but who cared? 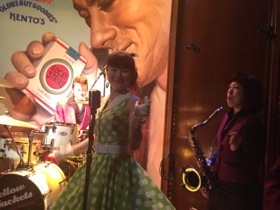 The following night was shared plates of chicken nuggets and fries, and spring rolls and popcorn, at Kento’s, a retro bar reached via an origami layout of tiny side streets.   Foreigners love this place (Japanese are perhaps not quite so sure). Drinks are spirits, in clear plastic containers, and beer, from cans. Music is a Rock’n’roll special, with girls on trumpets and keys, and a charming little kawai’I, cutie, singing in full 60s gear of tight-waisted dress and uniform white gloves.   This is oh so Japan, related to the Hello Kitty look I recall from last time in Osaka. 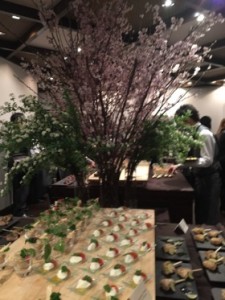 The final evening of ILTM, the Ryokan Collection put on an event that would have done any of the world’s top luxury hotels credit. Celebrating its tenth year, the Ryokan Collection promised a sake tasting. What resulted was a full-scale party, with tables groaning under cherry blossom displays and military-layouts of tiny culinary morsels, and chefs making sushi as fast as they could. The ryokans had brought along their own bespoke sakes, and Daishichi Sake Brewery Co Ltd had a big display, and offering. It was a glorious finale to this year’s ILTM Japan and I cannot wait for the next one.