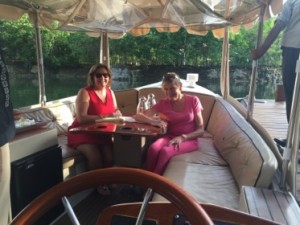 Alison Gilmore, Senior Director of all ILTM, had a powerful support team to make sure that ILTM Americas, at the friendly luxury Fairmont Mayakoba hotel, ran smoothly. You know any operation is going well when the boss can seemingly relax for a while, and one morning she hosted a breakfast meeting, à deux, on a silent electric lancha. For an hour, the gal glided through mangrove-lined waterways, spotting at least 12 of the 150 bird species on the 1,605-acre Mayakoba estate. All Fairmont Mayakoba‘s food is now masterminded by Mexico’s best known chef Richard Sandoval (see his lovely book New Latin Flavors: Hot Dishes, Cool Drinks; Abrams, 2014): on that morning, the hotel’s own Cesar Garza had prepared a spread with choice of smoothies, yummy fruits, every hot thing you could think of (in local ceramic pots) and two strengths of coffee. 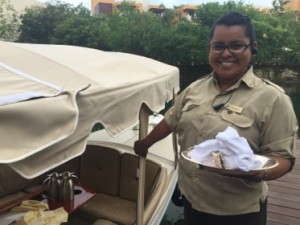 And oh, the finishing touch – and so typically Mexican. One hour later, on the dot, we disembarked, and the driver offered chilled scented towels. Then I went to see how meetings were going. The format is the ILTM blueprint. An equal number of exhibitors, hotels and the like, have computer-allocated 20-minute meetings with an equal number of travel advisors, here called hosted buyers. This year ILTM Americas had 265 exhibitors, up 20% on 2014. Of the 265 hosted buyers, a quarter were from Mexico, and, deliberately, the sizeable US contingent was culled from some quite small destinations as well as main hubs. As always, ILTM introduces many hosted buyers who have never been to any ILTM before. 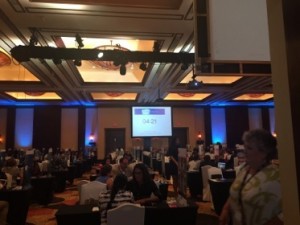 The computer generates over 15,000 meetings, and each exhibitor, and each hosted buyer, has an average of 55 appointments over three days. Exhibitors have a table, and stay put. Hosted buyers move around (at Virtuoso Travel Week it is the other way around – there, it is hotels, airlines and cruise ships who have to rush from one table to another). Here, both Leading and Small Luxury had their own rooms, as did Argentina and Colombia. All the meeting rooms are thickly carpeted, which cuts down on the chatter which might otherwise be distracting. Digital clocks projected on walls show how much time there is before this meeting is scheduled to end. 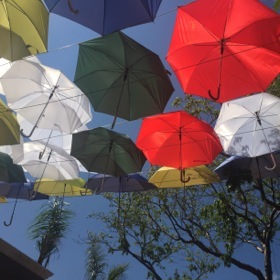 This being Mexico, of course there is colour everywhere. In between meetings, or if there was a break, delegates wandered out to bright green grass – yes, it did sometimes suddenly rain, but then equally quickly the sky would be Tiffany-blue again. I look back on such colourful memories as the burgundy rose petals carefully set on my bed to form the word Hola!, and the kaleidoscope of umbrellas overhead at one event. One night there was an impromptu showing of Jaws, poolside here at Fairmont. Most nights were margarita happy hours, at Rosewood. Banyan Tree was to host the closing party (I had a memorable dinner there with Peter Hechler, and the outgoing SVP Operations and Marketing, James Batt, shortly to be Assistant Director Hospitality at Houston‘s Museum of Fine Arts, and we all decided that the gin and tonic, namely Hendrick’s in a stemmed balloon glass, was really rather nice).  To be continued on Monday…..