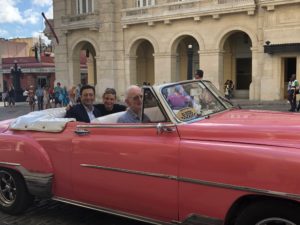 What does a visitor experience when sailing into Cuba’s capital (see a video below)?  As many are forewarned, this is an island where time has stood still, at least since 1960. The gal was picked up in a 1962 convertible, in her favourite fuchsia. There was no opportunity, sadly, to see under the bonnet.  It might well have been powered by a Soviet-era lawn mower. We were taken on a short tour, including along Avenue 5, the non-tourist area which is mainly a wide double-thoroughfare with an odd assortment of embassies dotted about. See the Russian embassy, above, but relax when you hear that this extraordinary building is an oddity and most of the other embassies seemed more normal. 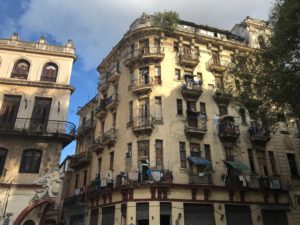 Many Cubans must be holding their breath in this time of new-year. In April 2018 Raúl Castro, brother of Fidel, stepped down as President, though he retained Chairmanship of the Communist Party.  His successor as President, Míguel Diaz Canel, is obviously putting caution ahead of making an immediate impact, but what can he do?  There is little overseas economic help, from previous donors Russia and Venezuela, and neighbours are sometimes scathing: The Financial Times, 9 April 2018, quoted former Mexican Foreign Minister Jorge Castañeda saying “Cuba no longer matters to anyone any more – except to Cubans”.  Cubans simply have to put up with what is sometimes history+decay, as some of the buildings on the right show. At the same time, Cubans are also looking forward to this November, when Havana celebrates its 500th birthday: a museum is scheduled to open on the exact date, November 18th, 2019, and there are massive restoration plans throughout the city, augmented by such mundane but much appreciated gestures as better street-lighting and garbage disposal. 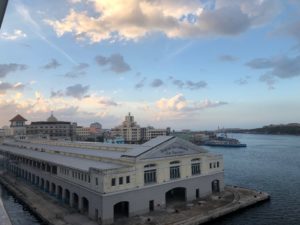 Cruise ships, which can generally navigate around the current US embargo on doing business with Cuba, are certainly helping spread the word that tourism helps this island, considerably. Even if the stop is only a few hours, that is enough time for passengers to get off and take a tour. Judging by the reaction of all those to whom I spoke later, back on board the RSSC Voyager, everyone had a marvellous time and, without exception, they wanted to return.  There was certainly something poignant sailing away from Havana’s somewhat run-down cruise terminal (no worry, Istanbul’s mighty Global Ports Holding Plc, which already manages ten other ports, including Lisbon, has signed a 15-year management contract with Havana and four more berths will be added). 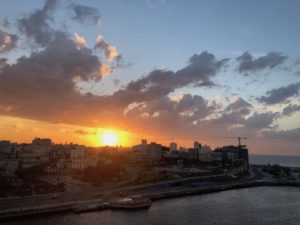 One of the glorious things about cruising, I find, are sunrises and sunsets.  At any time, unless it is raining, the sky can be magical, but invariably that effect is tenfold with the shades of red at both dusk and dawn.  In August 2018, National Geographicpublished a list of great sunsets, listing Cap Ferret, France; Colorado Springs CO, USA; Davis Mountains TX, USA; Grand Canyon AZ, USA: Hampi, India; Nanjing, China; Phú Quôc Island, Vietnam; Saskatchewan, Canada, and Victoria Falls, Zambia and Zimbabwe. That night, sailing away from the 2.13 million-population capital of Cuba was surely one of the best sunsets ever.  AND NOW SEE SAILING INTO HAVANA, AND, SO SADLY, SAILING AWAY