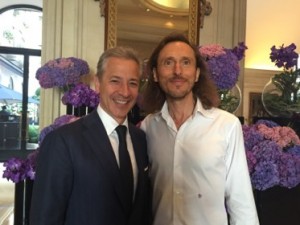 Some luxury hotels can be explained, so to speak, by the people you run into there. At Four Seasons George V in Paris, says the gal, you might just run into the owner, the hyperkinetic Prince Al-Waleed, who has just announced he will be donating his billions-fortune to the Just Giving campaign led by Warren Buffett and Bill Gates. Alternatively, to whom is hotel GM Jose Silva talking to right now? Is it the owner of Ladurée, David Holder? The talk, of course, is macaroons. If Jeff Leatham is around, the subject must be flowers and events. 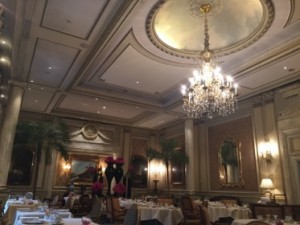 Later, Jose Silva talks excitedly about what is going to happen to the hotel’s food and drink. A new casual restaurant is being made out of what are now meeting rooms, and two round-top tube-shaped conservatories will extend into the central courtyard, replacing what are now two black canvas pagodas, pop-ups, albeit with working chandeliers. The beautiful Le Cinq restaurant will stay as-is but become even more prestigious – it will give up serving breakfast and become just lunch and dinner. What a stunning room this is. 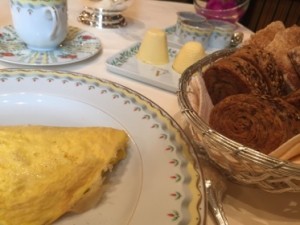 Dinner in Le Cinq, trying hard for a third Michelin star, started with Comtes de Champagne Taittinger 2009 with little nibbles that were, in fact, one-bite clear gel-like bubbles with tastes inside. I had an Eric Briffard special, gratinated onions, to start – the sommelier suggested a Madeira, 1986 Verdelho d’Oliveira. The meal was spectacular, even down to, or up to, the breads, with absolutely addictive rounds of wholewheat brioche. I enthused so much that, at breakfast, my omelette came with more brioche slices. And little mountains of both salted and unsalted butter. Bordier, of course. 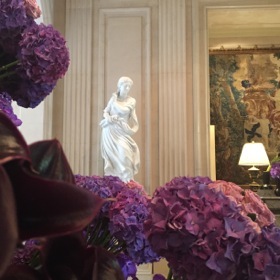 One of the four seasons sculptures in the lobby

And as I left this luxury hotel, a final touch – I was given a container with eight more brioche rounds. Another container held hotel-banded Bulgari Green Tea moist linen towels. I looked towards the four seasons sculptures occupying the corners of the lobby, and said a quiet au revoir.