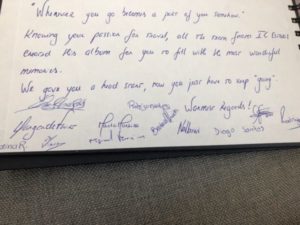 Estoril is mentally uplifting. That was the gal’s first thought on waking up at the stunning InterContinental Estoril and looking across the two balconies of suite 201 at the sunrise, above. Estoril also has unusually thoughtful, and creative, people. As well as selections of fruit, and lots of water, waiting in suite 201 was a spiral-bound book, a personalised travel journal.  Carina Rodrigues, who says she herself always keeps a travel diary, had led this compilation, and over a dozen of her colleagues had signed the foreword.  It was actually amazingly humbling to look through and realise how much work had gone into all this, a reminder of travels that had covered much of the world, with photos going back many years as well as 2018’s Greenland and Iceland. 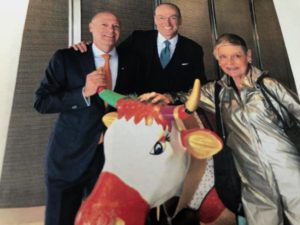 .. with memories of Geneva

Memories came rushing back. I arrived in Geneva once when Mandarin Oriental had a lifesize cow-for-charity outside its front door.  Philippe Leboeuf, GM of Mandarin Oriental Paris, was visiting, and he joined his Geneva colleague, Lars Wagner, for a photo. The book went on and on, but I had things to do, like find my way back to the gym, which uses mind-fitness to find, through several all-wall glass panels which sometimes open automatically, sometimes not.  I joined the locals, too, in an early morning power-walk along the coast path, between the rail line and the sea: it is only 15 minutes to Cascais.  Later in the day the small sandy protrusions that constitute beaches will be choc-a-bloc with sun worshippers. Now, there are only sunbeds, in military order. 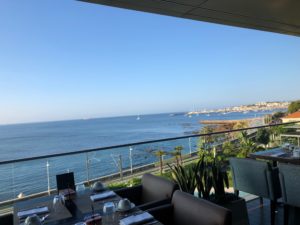 Breakfast at InterContinental Estoril is a delight, especially if you are early.  You are in the main hotel, rear of the sunny lobby which opens on to a glass-sided terrace. An adjacent inner room has the full buffet.  I meditated while enjoying great figs and papaya, and looking at the view. There is a library room here, too, where previous guests have left books. An eclectic collection in English, German and Portuguese gives an indication of who stays here – a couple of times I have talked to an athletic father and two early-teen kids who have also just arrived. The daughter, about 13 and as poised as model Kalya Gerber (16 years old and new ‘face’ of Karl Lagerfeld), carries a Louis Vuitton shoulder bag, suitably worn. 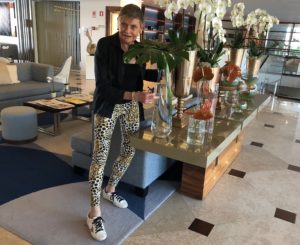 And a lobby of flowers

This is a hotel for the discerning, who want quality. The curvilinear outdoor pool, below my terrace, is uncluttered, as if it were your pool back home. For those who are driving, the valet service was one of the quickest I remember – there is masses of carpark space under the hotel, as you see when taking a short cut to the rail station and the sea. For those, like me, who relish every bit of exercise, you can bypass the elevator-down-to-carpark and, instead, walk outside, two minutes down a cobbled slope and then take 50 wood steps down to the rail station carpark.  Just as I got there, the time for my train, 11.09, approached, and only two seconds later, in pulled the railcar and I began my scenic coast-hugging trip back to central Lisbon, 38 minutes away. SEE A BEACH VIGNETTE