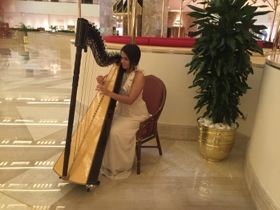 Which luxury hotels have harpists playing at breakfast? Belmond Grand Hotel Europe, St Petersburg, is one. Another, says the gal, is here, at Sheraton Doha Hotel and Resort. What a delight it is to have real music at breakfast (could all hotel managers please take note?). Breakfast is a copious buffet but later my friend Mariam orders breakfast à la carte. She goes for juice, a cappuccino and an enormous slice of cheesecake with berry coulis. 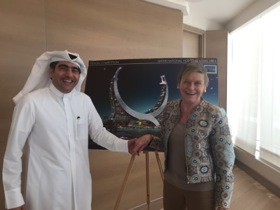 There are gold fretwork ‘umbrellas’ overhead as we breakfast – think of gigantic cloches that are cut into patterns. The largest of these apparently weighs 18,000 kilos and yes, they are all original, going back to the hotel’s 1982 opening. The hotel’s owners, Katara Hospitality, have deliberately taken the hotel back to its original glory, which means red carpets and sumptuous gold-edged chairs with plush cushions. All State and official visitors seem to stay here so this is showing off Qatar to the world. 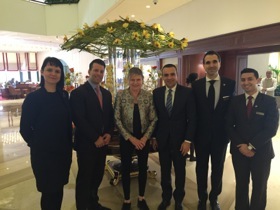 The hotel may be without a GM at the moment but it is not a rudderless ship and when I am about to leave, a whole retinue of people, led by the Lebanese manager Belal al Kadry, is there to make sure I am actually going (it is such a comfortable hotel and I do love its sports facilities but it is time to move on). Doha has a new airport, opened only a few months ago yet it has already won Skytrax’ best airport in the Middle East. Designed by HOK, it is futuristic in space and obviously all set to accommodate millions. 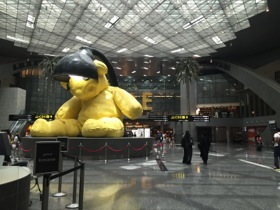 .. and a large bear greets at the airport

Like luxury hotels, airports benefit when they have at least one sense-of-humour ingredient. This teddy bear, with a giant ‘reading light’ for some reason set by it, is first visible when, on arriving in Doha, you walk around the upper glass-walled level of this enormous hall. You see it again, from below, when you leave. It still seems rather an incongruous final image of Qatar.