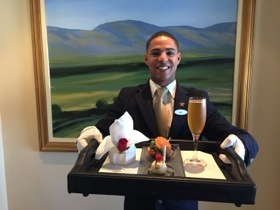 Welcome to your suite

This is the butler who greeted the gal at Cape Town‘s statuesque luxury hotel, Table Bay at The Waterfront. This butler knew just what to do and then kept out of the way until wanted. And really there was little for him to do (once the Chinese, who had bought out all 327 rooms except from mine, had departed, the WiFi worked fine – our Asian friends, apparently, had multiple devices that they used the whole time, perhaps for downloading movies, and had overloaded the system). Room 834 was so self-sufficient that a butler was barely needed, unless you put something down and could not find it again. 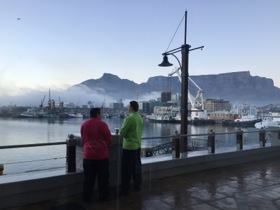 Dinner with GM Sherwin Banda was a delight, even though he had to pop across the lobby to say hello to Mrs Zuma – the first one – entertaining a local consul. While he was temporarily gone I took a photo of the label of the Lemberg Pinotage 2012 Tulbagh, which my Vivino app declared to be a 4.4: it went jolly well with the beer-roasted short ribs with Oscar lager jus. After an excellent night’s sleep, and a workout, I headed down to breakfast, where a young man plays the grand piano. Outside, on the hotel terrace overlooking one of the pools of V&A Harbour, named for Queen Victoria and her son Prince Alfred, two of the hotel chefs watched the morning mist. 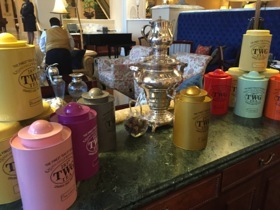 A display of tea canisters in the lobby

Later I walked back through the lobby, admiring tea canisters that had been set as building blocks. I thought of what designer Glenn Pushelberg had done at Park Hyatt New York. There, the taupe-grey-silver lobby has a couple of sets of stone blocks of different sizes, each a stone that is used somewhere in the interiors of that hotel. Here, the tea canisters are not only decorative but a reminder that afternoon tea is served both here, in the lobby, and outside, and jolly welcome if you have been sightseeing, say to Robben Island or Table Mountain, or spending an unbelievably small sum for what you bought in the adjacent Mall – the exchange rate for the rand is so favourable at the moment. 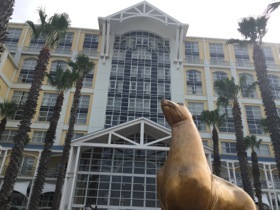 And outside, a big gold sealion almost guards this luxury hotel. Taking a photo of it, you see the entire façade of the hotel behind. Turn through 180 degrees, and you head straight around the Waterfront, with some of its 80-or-so eating places, and stores, and boat trips and helicopter trips and the Aquarium, and more. Apparently the Waterfront is being expanded, to make Cape Town even more attractive to visitors.