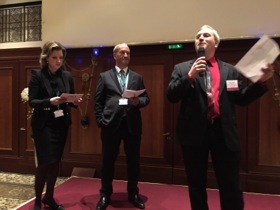 A few words at the Cornell-EHL party, hosted by the Adlon

One event that must surely go into the Berlin IHIF-ITB calendar is the joint Cornell-EHL Lausanne alumni party at Berlin’s iconic luxury Hotel Adlon Kempinski – this was the first year it has been held here, and the gal hopes it will stay. The ballroom was such an elegant venue, there was plenty of space, and with Laurent-Perrier as one of the sponsors it was sure to be a good evening. There really was outstanding networking, which included a good contingent from Hotel Planner, a Palm Beach FL-based company that specialises in putting groups into hotels, anything from ten to over a thousand at the same time. 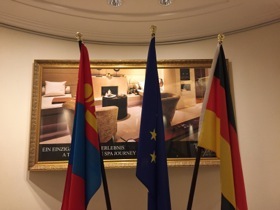 Hotel Adlon Kempinski can, of course, cope with lots of simultaneous goings on – GM Emile Bootsma says that with the hotel’s proximity to the Reichstag, and so many embassies immediately around, it is not unusual to have two or three international delegations staying at any one time. Right now, the hotel seemed to have a lot of Mongolians, the reason being that Mongolia is main supporter of the 2015 ITB. Travel agents are obviously prepared for hordes of Germans to take off for Ulanbaator this summer, which means that country-counting Germans will be able to brag, later, that they have now added Mongolia to their tally. (No, I have not yet been there, so I cannot brad about that one…) 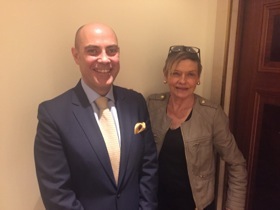 Germans will, however, feel at home in Ulanbaator as there is a Kempinski, a conversion of the old Khan Palace – and no, I have not yet been. I talked Kempinski in general with the company’s new CEO, the charming Alejandro Bernabe, who told me that long ago he had thought of becoming a financier, which is always good for the hotel world. But finance would be soulless, he felt, and he got his passion for hotel keeping when working at Sun City’s Old Palace, in South Africa, and that passion has just grown. One of the best reasons for being in Berlin at this time, by the way, is the people you meet away from either ITB or IHIF, both of which are packed like sardine cans. 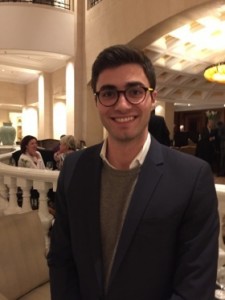 Alex Shashou in the Adlon

Take Alex Shashou, who contacted me out of the blue. Here is another financier, who had actually got started in the world of money before realising that luxury hotels could do with a bit of help in communications, between guests and staff, and staff and staff. He runs New York-based Alice, an app that manages those communications. Say you, the guest, want more pillows, put it in the app and housekeeping is alerted. If no action is taken, Alice’s office, whether in Rio, New York, London, Kiev or Moscow, steps in, and no request takes more than 15 minutes. Anything that improves efficiency, and customer service, is to be applauded. Well done.