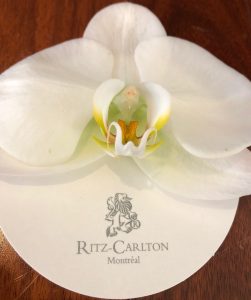 Style, at every turn

Put three words together, Montreal+luxury+hotel, and on and off, since it first opened in 1912, one property springs to mind, Ritz-Carlton Montreal. This is the hotel which, since 1950, has had a logo imprinted on the minds of global top-end travellers. Every summer, the duck house in the garden of the 129-room hotel stirs into action – see above. Ducklings arrive, grow quickly and give way to the next generation (better not to ask where the wrinklies go). Not only tradition and history, this is a hotel that has continual elements of surprise. The gal smiled at the fact that the china bowl of bath salts in end room 622 was topped by a perfect, and fresh, orchid. 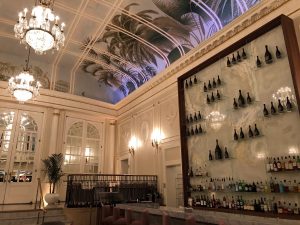 Ritz-Carlton Montreal is once again the top Ritz-Carlton worldwide, and although hardware, with the exception of one elevator, works just fine, it is the personalised service that makes the difference (on the elevator front, I am told the hotel is still waiting for attention by Otis, apparently less than efficient).  A team of four works full-time planning, and offering, touchpoints that are just right.  I was told of a female guest who found the bedroom plastered with post-it notes, each recording a memory from her husband. They were celebrating a wedding anniversary and it was this, rather than bubbly, that she remembered long afterwards, and she told all her friends, real and virtual. 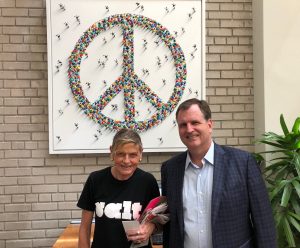 Andrew Torriani is the epitomal GM who runs this hotel – one of only two franchises in the Ritz-Carlton network – without having to go through many of the usual processes.  He has the best of both worlds.  His family has the management contract, and one of his brothers is co-owner of the building. When something is needed, it can generally be finalised in minimal time (elevator maintenance excepted). He is also one of those great GMs who realises that working flexi-hours can benefit everyone.  Despite it being a weekend, and a holiday, he cycled in to join me for brunch. Where to be photographed? By the ducks? Too touristy. By the Dom Pérignon bottles in the DP Bar that cleverly cover one of the high walls of the Art Nouveau rear lobby? Sends the wrong message. 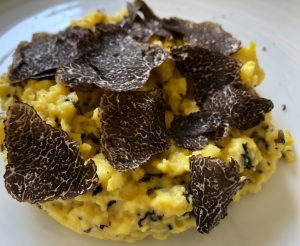 We settled on one of the half-dozen Jane Waterous pointillist splodge-paintings exhibited variously around this luxury hotel’s main floor – I had first come across this Canadian’s unique style at what is now Four Seasons Ocean Club in the Bahamas. And then we went through to Café Boulud’s brunch, a sell-out as always. I had breakfasted earlier off the hotel’s so-addictive smoked salmon, cold-smoked in the hotel, in lacquer style, which means continual marinading. Now I went for eggs, with truffle of course. And then, after a quick trip up to the rooftop to remind myself that next time I must use that pool and its adjacent outdoor sun terrace, it was time for me to leave.  Andrew Torriani, who a couple of weeks ago cycled with 26 hotel colleagues on a two-day bicycle marathon to aid cancer research, was, I knew, back in Café Boulud, networking with local clients before pedalling home. SEE ROOM 622, AND THE BREAKFAST BUFFET