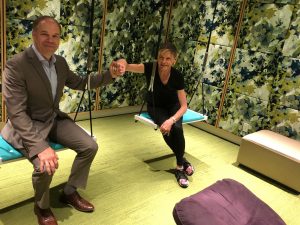 Hard to believe, but it is a decade since the gal stayed at Fairmont Queen Elizabeth, Montreal’s anchor hotel above the main rail station. This is where, in 1969, John Lennon and Yoko Ono held their famous Give Peace A Chance love-in, in suite 1742.  Since then things have moved on and up, fast. There is a commemorative all-wall photo of the pair in the lobby, but the real art is truly sensational: the image above, taken in the really good 21st floor Fairmont Or lounge, is an Escher-like steel model, Révolution 2010, for Michel de Broin’s five-floor-high staircase at the Jacobin Convent in Toulouse.  The hotel re-opened 2017 after an astronomical renovation, which included not only spending on art but on converting third-floor bedrooms to small-size meeting rooms. 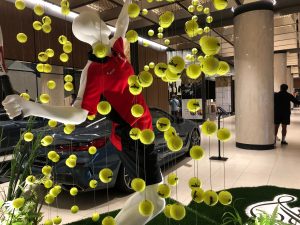 Tennis display in the lobby

Each unique, these rooms have such names as Ping (yes, that room’s carpet is grass green and the communal meeting surface is a ping-pong table) and Swing (see what is hidden in an alcove – photo above left). The hotel’s GM, David Connor, who also heads Accor for Eastern Canada, reckons the new-concept spaces more than compensate for losing bedroom revenue.  He still has 952 rooms and suites to fill every night, which, with average stay of 1.2 nights, means an awful lot of check-ins and check-outs every day. There is now, fortunately, a massive exaggerated-typeface artwork, Alexandre Berthiaume’s Typospective AI 2017, occupying the entire wall behind Reception to look at, in case you have to wait 30 seconds.   There are also special events in the lobby. As sponsor of the men’s Coupe Rogers 2019 tennis tournament, the hotel not surprisingly had game-related displays, and rangy muscular-calved guys, in the lobby. 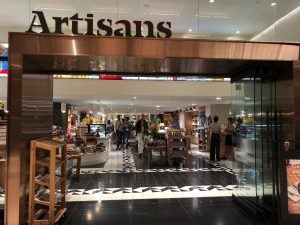 But the entire lobby has changed. The inner-circle Beaver Club gourmet restaurant is now Agora, an open space for displays and meetings. Whatever may have been there before is forgotten but the new Artisans gourmet supermarket is sensational, like a Dean & DeLuca meets Whole Foods, right in the hotel: I bought a cobb salad there, it was made on-site, tasted good. From here you can circle round to the new all-day eating-drinking venue, Roselys (do not ask me what the name means and sorry, I forgot to ask). This is so modern, different heights and types of seating. Why go out when you can eat and drink so well here? 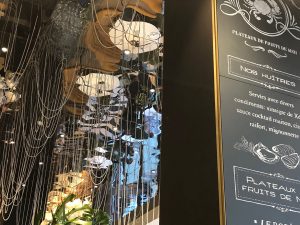 There is also a coffee corner, Krema. Yes, the temptation was to sign up Starbucks, says the canny David Connor, but every Tom, Dick and Harry does that.  Far more impressive is to work with local coffee companies and perfect something just right for this so well-established hotel, where top executives meet and stay as a matter of course during the long months when Montreal is a business and convention centre. And when those stalwarts go on vacation, some return with their kids, rooms become just family venues, and the hotel’s operations adapt accordingly. That flexibility is just one sign of a luxury hotel, and its staff. AND NOW SEE SUITE 2054