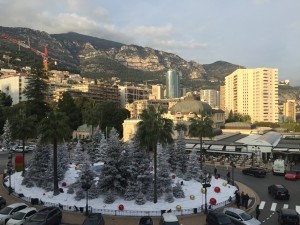 The gal first got to know what could be called Monte Carlo‘s signature luxury hotel, Hôtel de Paris, at the very end of the last century when Alain Ducasse co-hosted an important birthday party for Craig Claiborne, the celebrated New York foodie, writer and critic. Shortly afterwards he, the American, departed for on high, perhaps to supervise food for angels. At the moment the Frenchman is not here either: Louis XV at Hôtel de Paris closed September 28th, 2015, for five months of renovation. The whole hotel, by the way, is not merely been renovated but practically rebuilt. It is currently down to 40 rooms, from one of which – 224 – I can look down at Place du Casino and its magnificent ‘snow scene’. 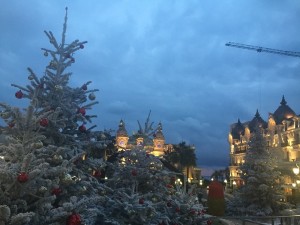 Where the rest of the 197-room used to be are now two gaping holes, straddling the ‘boutique hotel‘ that bravely operates as if nothing untoward was happening. Dining is in the magnificent Salle Empire, a ballroom that must be able to hold over 300 at a red carpet event. From a window-side table I can look across to the casino, bedecked for Christmas. Dinner was traditional, crisp-starched linens, silver salts and peppers. I love the local touches, barbagiuan spinach-filled canapé puffs, a Monaco specialty, and bread rolls infused with Menton lemon. I am brought a beetroot and ginger welcome drink, but I prefer the Lafran Veyrolles Bandol 2006 – the hotel’s celebrated 1874-vintage cellars, fortunately not being renovated, have over 400,000 bottles (there is a Pétrus 1970 on the wine list, and if you cannot guess, here it is, €3,550 a bottle). 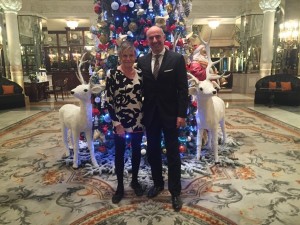 Luca Allegri in the hotel lobby

Built ten years earlier, the hotel itself is a splendid construction, with four buxom caryatids over the main entrance. Go in to the marbled and columned lobby, with fresco ceilings and a temporary, but totally plausible, mirrored wall where once you walked along to meeting rooms and restaurants. The Bar Américain is still open, and as popular with locals as always. Luca Allegri, who runs this hotel and also the entire hospitality arm of SBM, leans against a mounted statue of Louis XV: the horse’s raised front leg has been worn to a golden shine because every gambler knows it is good luck to hug this bronze limb before going the short walk across to the casino. 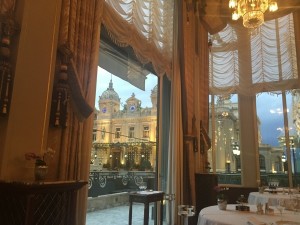 Looking out, at breakfast

Poor Louis. It was he who needed luck. Born in 1710, at Versailles, he became king at five, on the death of his great-grandfather – and he married when he was 15, to a Pole, Maria Karolina Zofia Felicja Leszczyńska, who was seven years older. I think about him as, in the morning, I breakfast back in Salle Empire, which, at eight precisely, I have all to myself – perhaps those staying in the other 39 operating rooms of this temporarily-smaller luxury hotel are sensibly eating in their gorgeous rooms. Over my Ferme des Peupliers yoghurt (full-fat of course), a good strong coffee to hand, I look again at the casino, a last glance before leaving town.