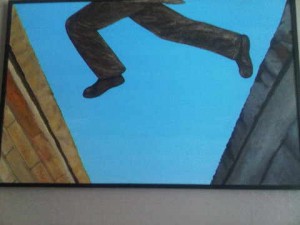 Legs are everywhere in key Russian cities.  The legs on the ladies, oh boy, the gal feels stumpy and dwarfed. The women are fashion-mad from an early age so whereas a 60-ish grandmother can look like a matryoshka doll, and her 40-ish daughter is somewhat overweight, a 20-ish is going, if she has any money at all, to look ravishing.

No problem if she is short.  She wears heels up to 15 cm high, supported by platforms. Get into any crowded elevator in a posh place in St Petersburg or here in Moscow and, guys, unless you are Magic Johnson or Jeremy Lin you will feel small.  So, legs… 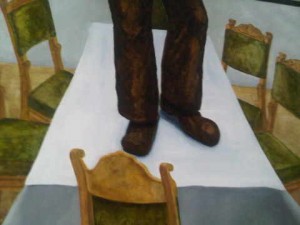 More legs, on the wall of the Popova room

InterContinental Moscow Tverskaya opened this February, and creatively called its meeting rooms after 20th century Russian artists.  There is one named for Natalia Goncharova 1862—1935, who did a lot of designs for Diaghilev, and with her husband Mikhail Larionov developed Rayonism.

Another is the Popova room, called for my favourite of the artists of that time, Lyubov Popova, born in 1889 and tragically to die of scarlet fever when she was only 35.  She designed a lot of textiles. 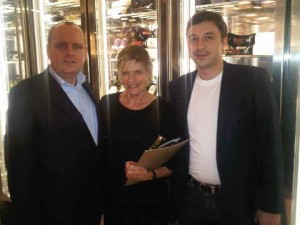 The InterCon is on the site of the former Minsk hotel, on Tverskaya street.  About four years ago the owners, Unicorp Management Company, wondered what to do with it.  They turned to a lovely guy who heads their real estate, Vladimir Poddubko, and he did a feasibility plan and the result was Knock Down The Old and Build The New.

Poddubko and his mates had a look at the InterCon in Dusseldorf and they wanted something like that, modern, steel and stone and glass.  The result is a very pleasant and stylish 205-room luxury hotel with furnishings that, in my room at least, verged on grey-haze through to cobweb colours.  Sounds awful but it was lovely (designed is Alex Kravitz).

Adored my steel-grey leather sofas with embossed patterns. The whole thing has so impressed Mikhail Gutseriyev and his nephew Mikhail Shishkhanov, who already own The National, that they have, apparently, bought this hotel, and the forthcoming Mandarin Oriental Moscow, this very day… 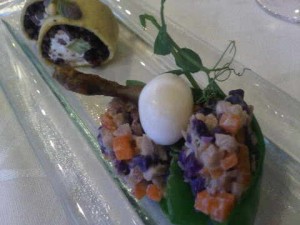 Herring with violet potatoes, peashoots and a poached eggs (behind, a mimosa roll of minced eel)

Anyway, Vladimir was in great form and we  had a very Russian meal in Chokhonte restaurant.  Russian salad their style, the real thing, is so far removed from the English idea of ‘Russian salad’ I will not even begin to describe the anglicised travesty.  The real thing is chopped vegetables, very fine, very good.  This went with herring with violet potatoes and peashoots and poached egg, and eel in a mimosa roll.

We tried kvass with it, a Russian fermented beverage made from black bread.  It is black coloured, quite tasteless and less than 1.2 percent alcohol (perhaps the hard drinkers shove some vodka in it?).  Next it was time for beetroot-flavoured herring, and lamb shank, Dagestan style with green buckwheat tabbouleh and pumpkin. 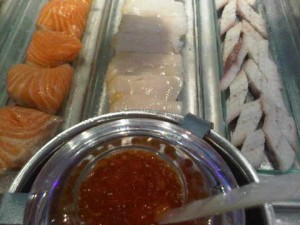 Breakfast was another Russian delight.  The array of dairy products is mind-boggling.  Smetana, sour cream; curd, full-fat and low-fat and drinkable and fruit yoghurts, and cheeses… and, on the seafood section, smoked salmon and butterfish and smoked eel, and salmon roe.  We were breakfasting in the third floor Club lounge.

In the main, club lounges are worth the extra spend, but it is good to know the product you are paying for.  Here, Regina, the woman in charge, was so beautifully caring.   Liked the fact that not only was the lounge spacious but it had, next to it, a full business centre with five work stations. 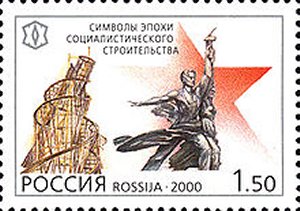 Vladimir Tatlin, who also has a room named for him, designed a (never-built) tower…

Talking of work, those who come here for meetings (or possibly incentives or just to arrange a few things) might well end up in another of this hotel’s themed rooms, the Tatlin.  Do a bit of research. Vladimir Tatlin 1885-1953, was born in Ukraine, and is remembered as being central to Russian Constructivism.

He is best known for his architectural tower, which was to have been about 1,200 ft high.  He designed it in 1919 after the Revolution but it was never built.  It is commemorated on a 2000-edition Russian stamp, value 1.5 rubles, along with a Kolkhoz Woman by Vera Mukhina. 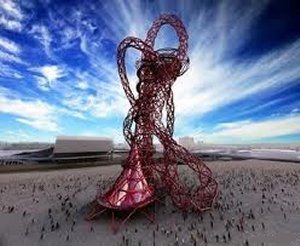 ..that is not unlike Anish Kapoor’s ‘tower’ for London’s 2012 Olympics

How fascinating that the Tatlin tower has more than a passing resemblance to the tower that Anish Kapoor has designed for the 2012 London Olympics.  ‘Orbit’ is the familiar name of the ArcelorMittal Orbit, its official name, a soaring red mass of grownup spillikins that soars just under 450 ft into the air (some call it the Colossus of Stratford, or the Hubble Bubble – £16 million of its over-£19 million cost came from England’s ‘Indian king’ Lakshmi Mittal). 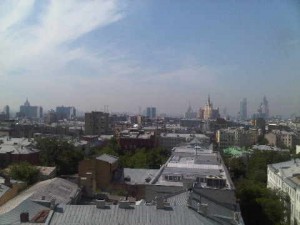 View of Moscow skyline from room 1116 of InterContinental Moscow Tverskaya

Interestingly, when I look out of one of the windows of room 1116 of the luxury Hotel InterContinental Moscow I do not see anything so controversial or grating. I see parks nearby, and, beyond, monasteries that welcome visitors.  Lots to do tomorrow, gal, get going..