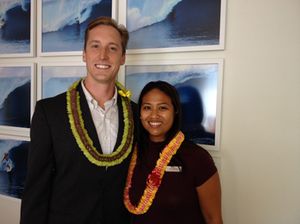 Ryan Tucker and Heidi Maxwell at The MODERN

Ryan Tucker and Heidi Maxwell are typical of the younger generation of hotel people you find on Hawaii – they are passionate, efficient, and charming. He is concierge, she is the housekeeper, at The MODERN, the top luxury hotel by the Ala Wai Yacht Harbor, half a mile to the west of Waikiki. Why ‘The MODERN’, asked the gal?  Owner Bob Davidson, a kids’ software tycoon and philanthropist out of Tahoe, discovered that the most used relevant question on google was from those asking for a modern hotel in Waikiki, or in Honolulu, as balance to all the heritage properties. 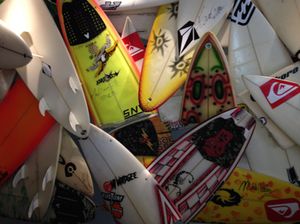 This one is certainly not heritage in the usual sense of the word.  Walk into the lobby of the 17-floor block and, immediately to your right, there is an amorphous blob of a check-in desk, a kind of shapeless art work.  On the wall behind is a collage, by surfing artist Herb Fletcher, of real broken surfboards.  Some are signed, including one with Kelly Slater scrawled on it.  This 42-year old has been crowned ASP World Tour Champion a record 11 times and he gained notoriety once when drinking another beer at a Budweiser competition – there are 15 framed photos of this actual event, by Herb Fletcher, on the wall of room 2710 (Ryan Tucker and Heidi Maxwell are photographed in front of it). 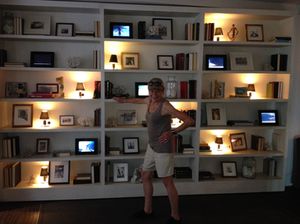 Helping the ‘bookshelves’ rotate at 5pm

We have not finished with the unique qualities of the 353-room hotel’s lobby.  At the far end, to your left, is a ceiling- high bookcase holding an assortment of books, and illuminated surfing photos. Promptly at five every evening, someone, as if ringing the closing bell at the New York Stock Exchange, gently swings the bookcase on its off-centre pivot, and as it rotates it reveals, behind, a large bar. This starts out quiet, at that time, but builds momentum to fuel the most happening place in this part of town. In the morning, it is open again, to offer coffee and snacks to those who do not want a proper breakfast, shaded or in the glorious sun, on the patio of one of the two pools. 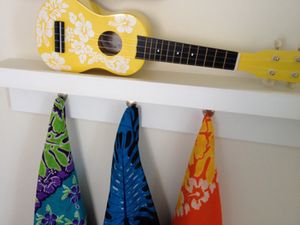 Sarongs and a guitar

Yes, Bob Davidson and his lovely GM here, Gerald Glennon, have thought of everything. There is a full-size rectangular pool by the patio bar that is great for kids, and for having fun.  Rise up stone steps to the next terrace up and there is an adult-only pool, oval and only just deep enough for getting wet, but who cares?  Spend all day here, at one of the 20 loungers that are actually set in the water. You might be wearing one of the three sarongs that are provided, with a colourful guitar, in room 2710.  This is not, by the way, any-old-room.  It is THE room to have, a full 1,400 sq ft for the one-bedroomed space, but it has 1,500 sq ft of terrace, which means you can have a party for 50 up there. 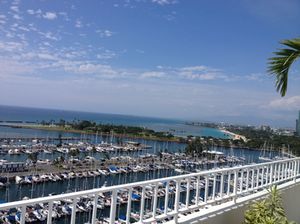 It was very tempting actually not to leave 2710.  I looked down at the marina and Waikiki Yacht Club and slightly to my left, to Duke Kahanamoku Lagoon, the artificial lake that some Japanese had made so his wife could water-ski (was there space?).  I could have played my guitar, and read some of the hardback classics that I am sure Bob Davidson, an educationalist through and through, had provided.  I actually got stuck into Mrs Gaskell’s Cranford, written in 1851 about a disguised Knutsford, where she lived.  Loved her mocking of the irrelevance of men (what were they there for, other than to look after dogs and to escort all the ladies of town?). 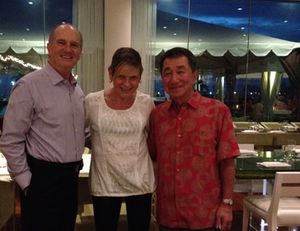 One more salient point about The MODERN.  It has one of Hawaii’s two Morimoto restaurants.  That night an important Japanese party had taken the private dining area, semi-hidden behind a gauze curtain. One of the party was my good friend Tetsuya Kobayashi, now Chairman of the luxury hotel where he has progressed up from swabbing floors, The Imperial Tokyo.  Of course we had to have a photo, with Koyabashi-san, and Gerald Glennon. Which photo would a designer be most likely to put up on a wall, a surfer holding an illicit beer can, or two eminent hoteliers?