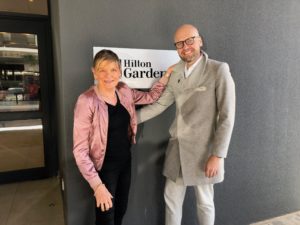 No, that is not a hotel, above – it is the official mansion of the President of Botswana, although the present incumbent, Mokgweetsi Masisi, lives elsewhere. Now, the gal had been several times to its Okavango Delta safari area but never to Botswana’s capital, Gaborone. Since its first global brand opened February 2019, bringing new-look, if not necessarily ‘affordable’ luxury to town in the form of the very agreeable 147-room Hilton Garden Inn Gaborone, now was the time to visit.  Fly in and one is amazed by the size of the gleaming Sir Seretse Kharma Airport terminal, definitely built for the future – South African Airways Express was the only plane on the tarmac at that point. There, to meet and greet personally, was Evan Harrington, the Hilton’s all-purpose and highly capable GM, whose sartorial tastes are a delight and surprise with every sighting. 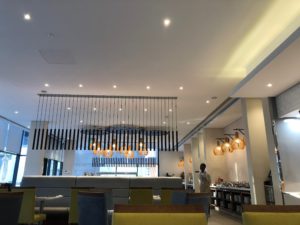 The hotel could be called a runaway success: it had anticipated June 2019 to have 58% occupancy at average rate of $115 but made 70% at $128.  Who stays there?  Business business (safari goers fly straight into Maan). Think diamonds, diamonds, diamonds, and Americans and others on aid purposes. These are people who like instant speedy WiFi, a clean and easy-to-manage room, a satisfactory StarTrac gym, an outdoor pool and, a blessing, a DIY launderette. They also like empty minibars that can be filled from a kiosk in the lobby, and a day-long restaurant, from 6.30 a.m. At dinner, we were served by Benny, who had worked at Walt Disney World in Orlando – Evan Harrington is the only non-Batswana in a total complement of 91, for which he had at least 500 applicants for each job. He is still on a lose-50kg-and-still-going diet but I had a glass of Nederburg Heritage Brewmaster Red Blend (everything you eat and drink seems to come from South Africa and, to help prevent waste, all salads are cleverly served in screwtop jars). 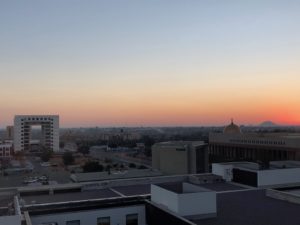 Apart from a few Disney-like modern ministry buildings Gaborone is single- or two-floor residences in gardens, set either side of wide red-dust streets in checkerboard alignment.  Babies are given a plot of land which, if they do not later use, will be taken back, and apparently giving overnight to some cows, goats or chicken suffices as use.  During the day these animals roam the streets.  I was driven around by Evan Harrington to see the two main sights.  One is places associated with Alexander McCall Smith’s best-selling series The No. 1 Ladies’ Detective Agency, which have been published continually from 1998 on (so far he has sold over 40 million books). We saw the house where Mma Precious Ramotswe lived, and the Cresta President Hotel, where she sat having tea on the patio. 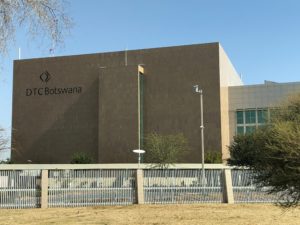 Researching McCall Smith later I discovered he had, as an amateur bassoonist, co-founded The Really Terrible Orchestra, and also Gaborone’s Number 1 Ladies’ Opera House, for whom he wrote the libretto of their first production, Macbeth, set among a troop of baboons in the Okavango Delta. But it was time to look at Gaborone’s other claim to fame, its Diamond Trading Centre. DTC Botswana is a 50-50 joint venture between DeBeers and the Government of Botswana, and getting into it is near impossible. I am told that every month the Sighting Week sees diamond dealers flying in, from Antwerp, Israel and India and elsewhere, and that, undoubtedly, is what helps support the excellent average rate of Gaborone’s best contemporary hotel. WANT TO SEE HILTON GARDEN INN GABORONE’S SUITE 605?