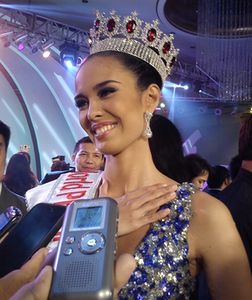 Megan Young was crowned Miss World 2013, on September 28th, in Bali – she is the first Filipina to win the title in its 62-year history.  Every luxury hotel in Manila would of course like to have her come through their doors, says the gal, but they may not be lucky.  She has the whole world to cover during her regnum.  In fact, in all honesty, she is only half Filipina.

She was born in 1990 in Alexandria VA, USA.  Her father, Calvin Young, is American.  Her mother, Victoria Tayde Young, is Filipina.  Megan and her sister Lauren, a bit of a media star herself apparently, moved to Olongapo City, Cambales, when Megan was ten. 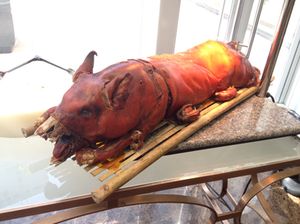 One has to bet that Miss World 2013 does not eat a lot of traditional Filipino food.  There is lots of pig, not only the suckling pig like this one, presented at Fairmont Makati’s famed Veuve Clicquot Sunday brunch. The local name for a pig like this is lechon.  You can have pork meat simmered in peanut sauce with vegetables (afritada), or as a sausage (longganisa) and pigs’ ears are considered a great delicacy.  Lots of meat, indeed, is popular on your plate – hence the number of roasts on any buffets, and Filipinos of all ages love their buffets. 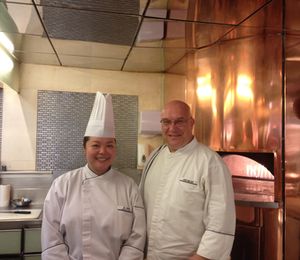 Someone told me during my stay that his PA eats three times as much as he does yet she is a size zero.  Somehow, however, come around age 40 everything blows up, face, body, arms and legs.  Look at the matrons in Philippine Tatler and their hair and make up are immaculate, and as for their spandex or other underwear, well they are – substantial.  I had a lovely lunch at the Hyatt, which is now changing its name to Hyatt Regency Manila.  The Austrian chef, Josef Miklavc, introduced me to his Market Place chef, Kristine Oro, one of the few female chefs in a top hotel in the Philippines. 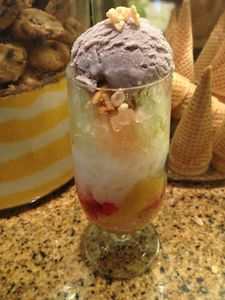 He also introduced me to halo halo (mix-mix).  Now if you don’t know halo, you have not lived.  Icecream lovers of all ages go crazy for halo halo, though I bet Megan Young does not eat it much.  Time Magazine has called halo halo the best-ever legal high, but it is not for everyone, or at least not for those who do not like the thought of canned sweetened condensed milk blended with shaved ice.  Basically, put things like boiled kidney beans, coconut, jackfruit, tapioca and sweet potatoes into a tall flute.  Put lots of shaved ice on top.  Pour over condensed milk. Top the whole thing with ube (purple yam) icecream and perhaps a chunk of condensed milk flan. 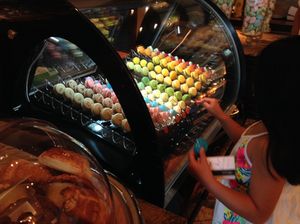 I am also not sure that Megan Young would go for macaroons, even though everyone else in Manila seems addicted.  The Fairmont-Raffles conjoined hotels have even called their ground floor kiosk Café Macaroon.  The young girl shown really wanted to try a blue macaroon. The server gave her one, as a result of which her father felt he had to buy a whole box.  There is also a craze in town, by the way, for eating croissant-doughnut combinations, all of them called something different.  Café Macaroon calls them doussant. At the Hyatt’s deli they are called crossnuts. 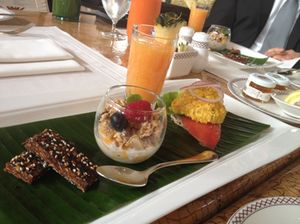 Vegan food at The Peninsula

No, I rather suspect that what might tempt Miss World would be the Farm at San Benito vegan cuisine, from Batangas, 90 minutes’ drive from Manila.  Fortunately it will soon be available here, in the capital, right at The Peninsula Manila.  The Swiss chef here, Samuel Linder from Interlaken, has done a deal with the chef there, Lucring Buking, so that the Farm’s detox vegan dishes will be served here, at this luxury hotel.  A trial breakfast platter included dried fruit jerky, mango granola, papaya enzyme shooter, and a corn scramble mound with coconut on a strip of tomato.