Room breakfast, Park Hyatt Tokyo style, includes a pitcher of yoghurt, and a big bowl to pour it into

After yesterday’s memorable Last Supper at the New York Grill (one of HOTELS magazine’s current Ten Great Hotel Restaurants of the World), it is fitting for the gal to offer a few disconnected thoughts on Japan.

This morning she awoke, in her lovely personal space at Park Hyatt Tokyo. Five o’clock wake up, with a real and friendly female voice on the phone. Half an hour later, escorted to the gym.

One hour after that, at the requested time exactly, room service brought breakfast.  No fuss, now ‘how are YOU today then?’ or anything like that. The table was wheeled in, the guy bowed and went out.  It was generous, and thoughtful.

The yoghurt came in a big milk-type pitcher, to pour or spoon into the bowl, there were paper caps on the juice (of COURSE it was fresh, what else could it be..) and the water, and the silver coffee pot, under a padded cosy, had a fabric holder so I would not burn my hands on the metal handle (and of COURSE the coffee was magnificent, what else would it be…)

Oh yes, the yoghurt came with, unrequested, little side dishes of mango purée, apple sauce and mixed nuts. Luxury dining, or rather breakfasting, in a luxury hotel.

A shinkansen (new train) gliides into a station, absolutely 'on the dot'

Everything exceeds expectation in Japan.  I have already raved about the trains, and how they work to clockwork. Every time an onboard officer, for that is how they are dressed, complete with white gloves, comes in or out of your carriage he bows, very deeply. And yes, these are men, at all times.

People come through wheeling or carrying bento boxes or other goodies for sale.  And yes, these are women, at all times (women of lesser uniform-category also clean the trains).

Talking of which, Japan is clean, full stop. Go to a typical health club-cum-spa and the washing and lathering that goes on in the shared, men’s or women’s, shower areas has to be seen to be believed.

Streets are meticulous. Whereas much signage, say of types of trees in a park, may be in English and Japanese, statements regarding litter are only in English as it is foreigners, of course (probably headed, of course, by the Brits themselves) who drop garbage.

I am not quite sure why so many locals wear masks in public places. There is either a high rate of head colds or there is a terror of pollution or SARS or foreigner contamination or what. Some youngsters seem to wear them as part of their Miss Kitty gear…

They spend a lot on clothes, by the way, just as their slightly-elders are spending heavily on the good material things of life.  After the initial shock of the March 2011 earthquake and its awful and deadly after-effects, sales of some super-brand jewelry labels went up in double digits. Spend now as you cannot take it with you.

At Narita, a group of travellers (some in face masks) is briefed, after which they will all bow deeply

In Japan Air Lines’ Sakura First Class Lounge, there are three times as many attendants as necessary. The Japanese are not programmed to productivity, but to doing things right.

Where else in the world do you find a pair of immaculately-clad young ladies, in full hats and white gloves, sitting at a desk in the foyer of an office block, just in case you might need them?

Their clones stand by elevators in department stores, to bow-you-in and bow-you-out.  All these, by the way, are highly desirable jobs, part of the ladder on the route to finding a husband.

And that husband will be much more highly regarded if he is in banking or manufacturing than in a service industry: I am told that the owner of the thousands of Lawson’s convenience stores would be more of a role model if he produced ball bearings. 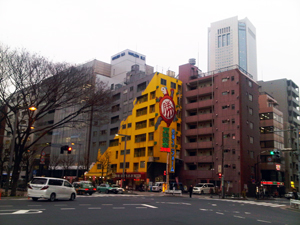 But some dare to be different - whoever painted this Shinjuku building bright yellow?

Fortunately there are some who dare to be different. Look at this building, just off Shinjuku park.  How did the owner get planning permission?  And just why did he want a bright yellow building with a cartoon figure on its side?

Shinjuku Park is a lovely area, surrounded by some of Tokyo’s most expensive real estate.  The exquisite Park Hyatt Tokyo is one end, the eternal Hilton Tokyo the other, the soaring Municipal Government complex, as a big as a city, down one side.  Within the park there are kids’ play areas, and teenagers’ skateboard areas, and small alpine-type huts.

There are also dozens of made-it-myself huts, homes of those who have opted out of mainstream life.  Typically these huts have blue plastic outer wraps held with rope, and the surroundings are immaculate, with not a hint of litter anywhere. There may be bicycles parked outside.

Personal belongings are stacked and stored as in a top department store. The home in the photo shows how all one man’s office supplies, including scissors, are neatly arrayed in containers just outside his ‘front door’.  Only in Japan…