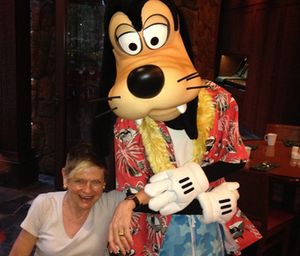 Goofie is so happy to be at Aulani

Having come across Mickey Mouse and Minnie Mouse in Las Vegas a few days ago, the gal was now firmly embraced by Goofy, here on Oahu.  Goofy, it appears, is a nickname for a cartoon character who first appeared in Mickey’s Revue, in 1932, as Dippy Dawg, with a full given name of Goofus D. Dawg.  Now the tall, anthropomorphic dog, often in a turtle neck and rumpled fedora hat, is simply known as Goofy.  Here on Oahu he is ‘on vacation’ with his good friends Mickey and Minnie, at the ideal luxury hotel for kids, Aulani, a Disney Resort & Spa at Ko Olina, in the south-west of the island.  He appears every morning, with M. and M. Mouse, at Auntie’s Breakfast. He is wearing latest Hawaii fashion. 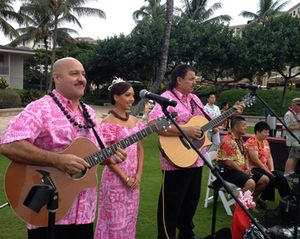 Musicians at the ready..,

This, at $34 ++ per adult, is more than worthwhile, for its superb buffet as well as the characters, but do reserve far ahead.  Had I not been by myself, and been there when it opened, at seven, I would never have got a table. After that I had to run, as fast as my little legs would allow, to Nai’a, one of four man-made lagoons at the 642-acre Ko Olina master-project that had been created about 120 years ago by sugarcane baron James Campbell. There was activity going on, I was told.  I came out of Aulani, where I was staying, turned south along Alfi Nui Drive past a big lawn, the beach and sports club and the golf course, and then headed west to the ocean, where I found these colourful musicians ready to announce the day. 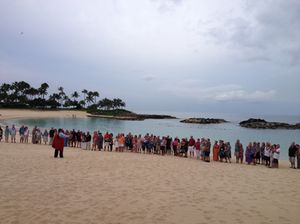 .. for 50 couples renewing vows, on the beach

They were there to serenade 50 couples renewing their vows on the beach.  It was actually incredibly moving.  The couples, all man plus woman, with one black face among the hundred, were all ages, all sizes, and some had brought their kids.  They started in a semi-circle around the priest, a guy whose hair, way below his waist, was in a single plait. A red blanket was flung over one shoulder. Skilled professional AV meant we could all hear every word clearly, as he enjoined those around him to remember when they had first met, and the ups and downs of life.  Memo to anyone coming up to an important anniversary; try to be at Ko Olina for February 14th, 2015. 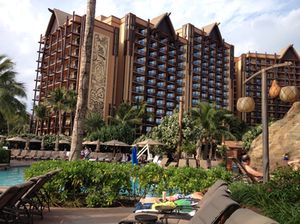 Ko Olina reminds me a bit of Nevil Shute’s memorable 1950 epic A Town Like Alice, which tells the supposed story of a new town that started from one generator to enable construction workers to have ice cream in the desert. Ko Olina was an aborted project when a young entrepreneur from Burbank, Jeff Stone, bought in in the late 1990s. He added this, he added that, and he was absolutely thrilled to entice Disney, who wanted an extension of the Disney brand. Many Disney followers also go to Hawaii, so why not bring Mickey, Minnie, and Goofy, to Hawaii, too – and to Oahu, because Honolulu has the best international airlift.  The towering Aulani (‘messenger of the chief’) opened 2011, with 351 rooms and nearly the same number of Disney Vacation Club (timeshare) units, in two 17-floor blocks flanking, in V-formation, a central building. 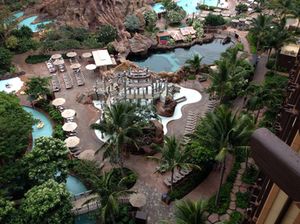 Looking down from room 1430

The bedrooms are all pretty much the same, namely room for two adults and two kids.  The place seems to be full non-stop. From room 1430 I could look down, from the balcony that all units have.  There, in that V-space, is the gigantic lazy-water, a self-moving riverway like the ones at many Florida resorts – you also find them in Thessaloniki, at Waterland WaterPark, and at Jumeirah’s Wild Wadi Waterpark in Dubai.  Kids of all ages, right up to geriatrics, seemed to float around in yellow rings all day long.  There is also the beach, and a free club for kids, and anyone gets free non-alcohol beverages, 24/7, from dispensers set around the 21-acre Aulani space. Not a foot is wasted, by the way.  In among the lazy river is a man-made mountain, for water chutes. 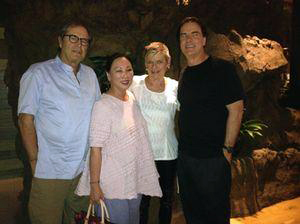 The king of the town-like-alice, Jeff Stone, hosted dinner.  We decided to leave this kids-heaven luxury hotel, and the Mouse pair and Goofy, behind and took a buggy golf cart over the sugarcane rail line, still used for weekend tourists, to Ko Olina Station, the complex’s shopping area. The best restaurant in town is Monkeypod by Merriman, one of celebrity restaurateur Peter Merriman’s eating places.  This was fun and noise, upstairs and, even more, downstairs, but fortunately we were upstairs so, I could hear Jeff’s version of Ko Olina, and Paul Theroux’s hilarious account of driving in the Deep South to study gun lobbies.