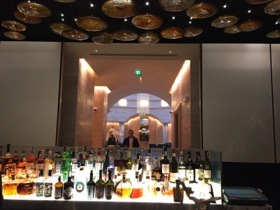 View across MIO bar counter to the lobby Winter Garden

The owners of the luxury Park Hyatt Milano hotel are not afraid to spend to get even more quality. MIO bar and its adjacent VUN Michelin-starred restaurant have been redone by Flaviano Capriotti – apparently his first solo commission, the gal was told, since breaking away from his mentor Antonio Citterio. The bar’s central, open-square counter is now the focal point of an area that flows through to the winter garden area back of the lobby, and, in another direction, round to seating areas. And in summer it also flows out to pavement-set tables. 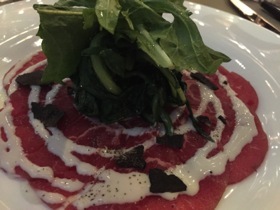 You can dine there, sitting up at the counter or at one of the tables set in all the aforementioned areas. We started with drinks up at the counter, watching the mixologist conjure up confections in all colours. We talk about how MIO is an all-day gathering place, from breakfast on. It works with the best – on May 1st, 2015, it launched a partnership with Abarth, the cult car brand started by Carlo Abarth in 1949, and sold on to Fiat in 1971 (the Mini-like Abarth town car stylishly complements Park Hyatt culture, I was told). We move, to a lower table, with normal height chairs, and I start with Piedmont beef carpaccio. 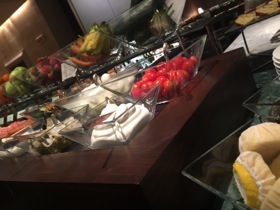 Make your own carpaccio, at breakfast

I go on to veal milanese, like wienerschnitzel but juicier, here served with radicchio salad. It goes extremely well with a glass of 2010 Paolo Scavino Bric del Fiasc, Barolo DOCG, a vineyard founded 1921 by Lorenzo Scavino (my mind momentarily wanders to the launch of the Frescobaldi–Mondavi Luce when another Lorenzo, Frescobaldi, told the assembled gathering how he was the 14th generation vintner).Throughout the meal, people come in and out, for a drink or dinner. Only a few hours later, it seems, the bar counter will be transformed, into the operative area for the breakfast buffet, which turns out to be epitomal for display as well as quality. 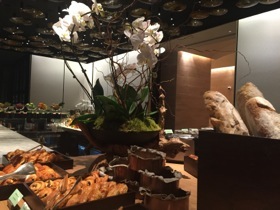 How can one not taste tomatoes and bocconcini and treccia and ricotta at breakfast, in a fine Milan luxury hotel? I see locals only having a coffee and a slice of tart or biscuit, but that is not the English way to start the day. A Berkel slicer, white and polished, stands ready in one corner to slice cold cuts as required. And yet and yet, as always in Italy I never feel I have eaten too much. Perhaps that is yet another appeal of Italy for yet another visit.