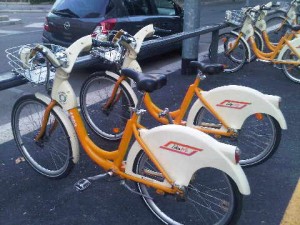 The rent-a-bike scheme in Milan,  is a maximum-two-hour service, and – unlike London’s Barclay’s-sponsored Boris bikes – there seem to plenty of bikes to rent, and ample unused slots for you to return a bike when finished.

Milan in summer is a biking haven, even though you have to navigate cobbled streets to get to many of the best hotels. The locals seem to manage all right, you see’em going to and fro from work in their little, like size-zero, Armani or whatever. The gal preferred to walk or run. 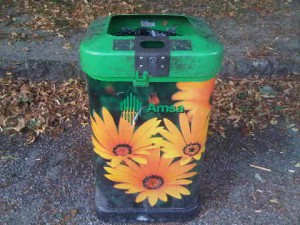 One of the favourite running places, extremely handy for all the luxury hotels on this trip, is Giardini Pubblici.  Enter, and there is a quite emotional statue to a journalist Indro Montanelli.

Carry on around the two-mile-total circuit and you pass lots of garbage bins and, typically Italian, they have taken the mundane, like a litter storage container, and made each into a decorative art work. 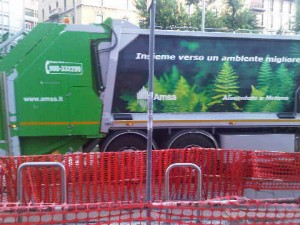 .. as are the city’s garbage trucks.

The same with the garbage trucks.  Think of their equivalent in the Third World (no, says anyone holding their nose in disgust, rather not).  Think of the utilitarian trucks in Kings Cross, England, or Queens, USA, and you know they are plastered with their outsourced companies and safety notices.  Here, in Milan, the trucks are more decorative art works. 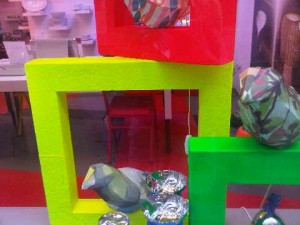 The Alessi store is full of colour…

Milan is the centre of design.  In 1921 Giovanni Alessi founded the company that still bears his name – it is now run by his grandson, Alberto Alessi.  Alessi uses only outside (yes, outsourced) designers, names of the calibre of Italian Alessandro Mendini and Brit Jasper Morrison.

Its best-known designer is Frenchman Philippe Starck, who is one of the speakers on the future of Europe that the International Herald Tribune is hosting in Paris on October 4th, 2012.

Since he wrote in the Sunday Times a couple of weeks ago that he has to make love twice a day, before breakfast and after lunch, how will he fit in future-casting? Mr Starck is now on his third wife, by the way. 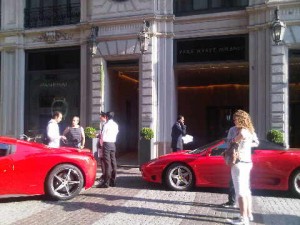 .. as are Ferraris outside Park Hyatt Milan.

One of Italy’s legendary designers, Sergio Pininfarina, sadly died July 31st, 2012.  He took over the company that his father, Pinin, had started in 1930 and he revolutionised the way Italian cars look (he designed nearly all Ferraris since the 1950s, and that company’s Luca di Montezemolo says he was one of the most important advocates of ‘made in Italy’ all over the world).

He also designed Alfa Romeos, Cadillacs, Fiats and Maseratis – he did Masarati’s GranTurismo, GranTurismo Convertible and its Quattroporte, house car of The Baglioni London.  There was a trio of red Ferraris outside the main door of Park Hyatt Milan. 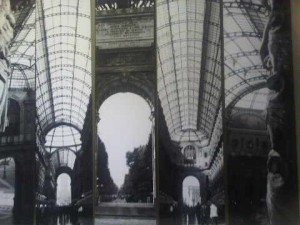 A print, in the hotel, of the adjacent Galleria

Now this is an interesting luxury hotel.  Like its Hanseatic sibling, Park Hyatt Hamburg, it is part of a shopping mall.  But whereas the Hamburg hideaway is tucked right inside the shopping complex that Franz Back built in 1911, this particular hotel is the next block to the cross-shaped Galleria Vittorio Emanuele II arcade, built by Giuseppe Mengoni 1865-1877 (how he would have died had he known the stunning glass-topped building today includes a McDonald’s).

The Galleria leads, without directly connecting, to the Duomo cathedral and the Teatro Alla Scala.  Once inside, avoid the Big M and look instead at the central mosaic showing a bull from Turin’s coat of arms (why Turin?).  You might well see a tourist turning round three times on the bull’s genitals – supposedly, do this and you get good luck. 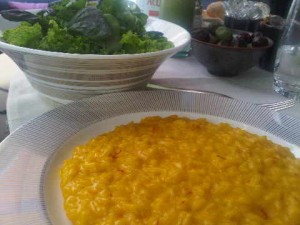 Risotto Milanese, with lots of saffron

There is a print of the old Galleria in one of the new suites at Park Hyatt Milan, which has just replaced eight old rooms by four stunning suites, designed like the entire 115-room hotel by Ed Tuttle (is it true he said ‘I am not designing a Westin’ when someone queried the cost of some of his materials?).

Most walls here are Travertine limestone, some of them deliberating rubbed with black inlay to fill the holes that are typical of this stone. All bathroom fittings and door handles are black, and there is a significant lack, intentionally, of colours.  This hotel, darling, is a monument.

But you can get colour with a typical risotto Milanese, which made with beef stock, beef bone marrow, lard (not butter) and cheese, and flavoured and coloured with saffron. 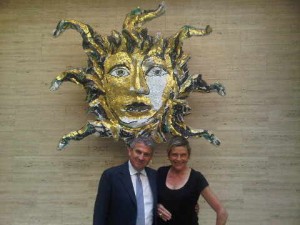 During the business-quiet summer months, the main restaurant, Vu, is closed for updates that include putting in a wine-cellar private dining room. You can eat outside, on the terrace, or in the bar – where a cream Berkel food slicer exactly matches the table linens.

You can also eat in the lobby lounge, another monumental element, some 20 feet high, with, set in a circle, eight large stone columns rising to a 16-sided cornice where each fact is centred by a rear-illuminated glass panel.

At the back of the whole area stands the hotel’s most valuable artwork, Testa di Medusa by the Argentinian artist Lucio Fontana, 1899-1968.  The hotel’s boss, the always-sunny Claudio Ceccherelli, beamed as he shared the good things that are happening at this luxury hotel, and no, he has no time to go and listen to P. Starck et al (what would he learn?) or even to travel to Vegas.