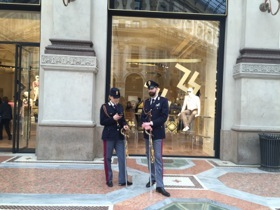 Galleria guards at the ready (really?)

Milan has so much – currently, the World Expo, plus, at all times, La Scala, the Duomo and some outstanding luxury hotels. It also has arguably the world’s most elegant shopping mall, Galleria Vittorio Emanuele II, named for the first King of the Kingdom of Italy. It was designed in 1861 by Giuseppe Mengoni and opened 1877. Last time the gal was in town the Galleria was, frankly, rather tacky, with McDonald’s among the better brands. There were always characters around, and there still are (though it is probably not a good idea to mess with security in case they know how to use those swords). 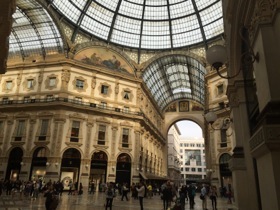 But now Milan is being overhauled, at considerable cost to some of the best known Italian brands. McDonald’s initially sued for €24 million when its lease was not renewed in 2012 but backed down when it was given another place just at the far end of the Galleria’s cross-walk. This means that in the Galleria itself, gone is the tack, to give way to Prada, Louis Vuitton, Versace and their ilk. Italians appreciate the need for private enterprise to help restore the nation’s treasures. In Rome, Diego Della Valle of Tod’s is restoring the Colosseum, Fendi is paying for the restored Fountain of Trevi and Bulgari, which has a private two-room apartment a few minutes away, is sponsoring the ship statue and fountain at the base of The Spanish Steps. 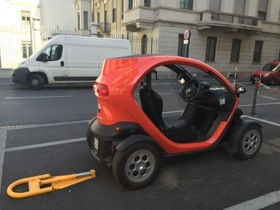 Ideal for buzzing around town

Here, in Milan, everywhere I look there is art and design. Even one of the smallest cars in the world, plonked rather than parked in the street outside the Bulgari hotel, looks like a sculpture that cleverly manages to be able to give people, or at least one person, a lift (well, Antony Gormley’s giant Lego-like ‘man’ sitting on top of the Beaumont hotel in London cleverly manages to let someone sleep in the room that is inside ‘him’). 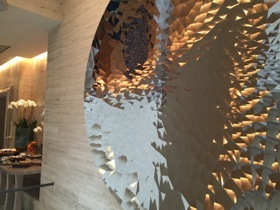 The elements of art and design are infectious. The closest luxury hotel to the Galleria, Park Hyatt Milano, has always had a significant artwork at the back of its Travertine stone lobby. First it was a Gerhard Richter painting loaned by sister hotel, Park Hyatt Chicago, but then the owner, both of painting and the Chicago hotel, Tom Pritzker, sold the Richter. Next, Park Hyatt Milano had a stunning yellow, gold and black sunburst – Testa di Medusa, by the late Argentinian sculptor Lucio Fontana – loaned by this hotel’s majority owner, Alicia Koplowitz. Has she sold the sunburst on, or put it elsewhere? Anyway, the Park Hyatt Milano lobby’s current decoration is this giant mirrored and resin concave reflector by Anish Kapoor.